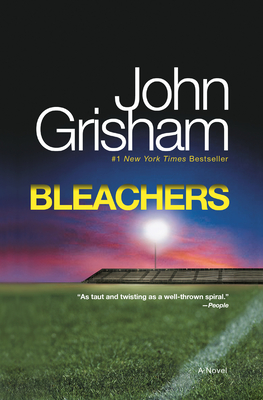 
Not On Our Shelves—Ships in 1-5 Days
#1 NEW YORK TIMES BESTSELLER • High school all-American Neely Crenshaw was probably the best quarterback ever to play for the legendary Messina Spartans. Fifteen years have gone by since those glory days, and Neely has come home to Messina to bury Coach Eddie Rake, the man who molded the Spartans into an unbeatable football dynasty.

Now, as Coach Rake’s “boys” sit in the bleachers waiting for the dimming field lights to signal his passing, they replay the old games, relive the old glories, and try to decide once and for all whether they love Eddie Rake – or hate him. For Neely Crenshaw, a man who must finally forgive his coach – and himself – before he can get on with his life, the stakes are especially high.
John Grisham is the author of forty-seven consecutive #1 bestsellers, which have been translated into nearly fifty languages. His recent books include The Judge's List, Sooley, and his third Jake Brigance novel, A Time for Mercy, which is being developed by HBO as a limited series.

Grisham is a two-time winner of the Harper Lee Prize for Legal Fiction and was honored with the Library of Congress Creative Achievement Award for Fiction.

When he's not writing, Grisham serves on the board of directors of the Innocence Project and of Centurion Ministries, two national organizations dedicated to exonerating those who have been wrongfully convicted. Much of his fiction explores deep-seated problems in our criminal justice system.

John lives on a farm in central Virginia.
“As taut and twisting as a well-thrown spiral.”—People

“[Grisham] makes this football game so real that the reader can almost see and hear it.”—The New York Times

“Some of the best writing from Grisham . . . [He] makes Bleachers sing.”—Los Angeles Times