The Code Book: The Science of Secrecy from Ancient Egypt to Quantum Cryptography (Paperback) 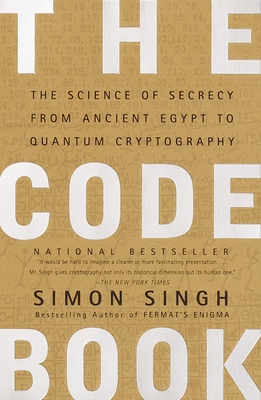 The Code Book: The Science of Secrecy from Ancient Egypt to Quantum Cryptography (Paperback)


In Stock—Click for Locations
In his first book since the bestselling Fermat's Enigma, Simon Singh offers the first sweeping history of encryption, tracing its evolution and revealing the dramatic effects codes have had on wars, nations, and individual lives. From Mary, Queen of Scots, trapped by her own code, to the Navajo Code Talkers who helped the Allies win World War II, to the incredible (and incredibly simple) logisitical breakthrough that made Internet commerce secure, The Code Book tells the story of the most powerful intellectual weapon ever known: secrecy.

Throughout the text are clear technical and mathematical explanations, and portraits of the remarkable personalities who wrote and broke the world's most difficult codes. Accessible, compelling, and remarkably far-reaching, this book will forever alter your view of history and what drives it.  It will also make you wonder how private that e-mail you just sent really is.
Simon Singh received his Ph.D. in physics from Cambridge University. A former BBC producer, he directed and co-produced an award-winning documentary film on Fermat's Last Theorem that aired on PBS's Nova series and formed the basis of his bestselling book, Fermat's Enigma. He lives in London.
"It would be hard to imagine a clearer or more fascinating presentation. . . . Mr. Singh gives cryptography not only its historical dimension but its human one." --The New York Times

"Entertaining and satisfying. . . . Offers a fascinating glimpse into the mostly secret competition between codemakers and codebreakers."        --USA Today

"A good read that, bless it, makes the reader feel a bit smarter when it's done. Singh's an elegant writer and well-suited to the task of leading the mathematically perplexed through areas designed to be tricky."        --Seattle Weekly

"An absorbing tale of codemaking and codebreaking over the centuries." --Scientific American

"Singh spins tales of cryptic intrigue in every chapter." --The Wall Street Journal

"Brings together...the geniuses who have secured communications, saved lives, and influenced the fate of nations. A pleasure to read." --Chicago Tribune

"Enthralling...commendably lucid...[Singh's] book provides a timely and entertaining summary of the subject." --The Economist