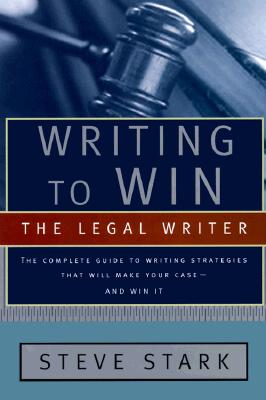 From a master teacher, a results-oriented approach to powerful legal writing that communicates, that persuades--and that wins.

Of all the professions, the law has the most deserved reputation for opaque, jargon-clogged writing. Legal education, which focuses on judicial opinions, not instruments of persuasion, is partly to blame. Yet forceful writing is one of the most potent weapons of legal advocacy. In Writing to Win, Steve Stark, a former teacher of writing at Harvard Law, who has taught thousands of aspiring and practicing lawyers, has written the only book on the market that applies the universal principles of vigorous prose to the job of making a case--and winning it.

Writing to Win focuses on the writing of lawyers, not judges, and includes dozens of examples of effective (and ineffective) real-life writing--as well as models drawn from advertising, journalism, and fiction. It deals with the problems lawyers face in writing, from organization to strengthening and editing prose; teaches ways of improving arguments; addresses litigation and technical writing in all its forms; and covers the writing attorneys must perform in their practice, from memos and letters to briefs and contracts. Each chapter opens with a succinct set of rules for easy reference.

No other legal writing book on the market is as practical, as focused on results, as well written as Writing to Win.

Steven D. Stark is a former cultural commentator for CNN, National Public Radio, and the Voice of America. He has written frequently for the "New York Times," the "Los Angeles Times," the "Atlantic Monthly," and both the "Boston Globe "where he was an op-ed columnist and the "Montreal Gazette" where he was a world sports columnist. A former Lecturer on Law at Harvard Law School, he is a graduate of Harvard College and Yale Law School. His website is at www.starkwriting.com