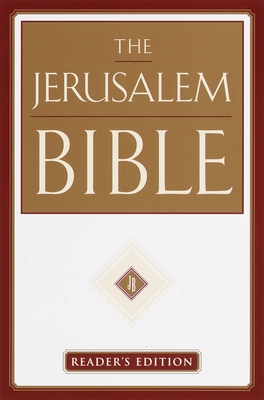 
Not On Our Shelves—Ships in 1-5 Days
When it comes to Bible translations, readability and reliability are what count; and on both counts, the original JERUSALEM BIBLE stands alone. A product of the age of the Second Vatican Council (1962-1965), THE JERUSALEM BIBLE (published in 1966) was the first truly modern Bible for Catholics. Using definitive original language texts such as the Dead Sea Scrolls, biblical scholars of L'École Biblique in Jerusalem produced a meticulously accurate, wonderfully readable French translation of the complete canon of Scripture (La Bible de Jérusalem). From this French original came the English edition, edited by renowned Bible scholar Alexander Jones.

For all the people around the world who are discovering or revisiting the mysteries contained in the Scriptures, only a clear, understandable Bible translation will do. With language as exquisite but more modern than the King James Version, THE JERUSALEM BIBLE is the one they can trust.
ALEXANDER JONES (d. 1970) is considered one of the world's leading biblical scholars. He lectured extensively and authored innumerable articles and several books based on the Scriptures. Formerly a senior lecturer in divinity at Christ's College, Liverpool, he studied at Upholland College in Lancashire, the Gregorian University, and the Biblical Institute in Rome, as well as L'École Biblique in Jerusalem.
Praise for THE JERUSALEM BIBLE (1966 edition):

"This is one of those really monumental works.--There is just nothing like it in English, and I will not live long enough to see anything like it."--Father J. L. McKenzie, President, Society of Biblical Literature