Under Jerusalem: The Buried History of the World's Most Contested City (Hardcover) 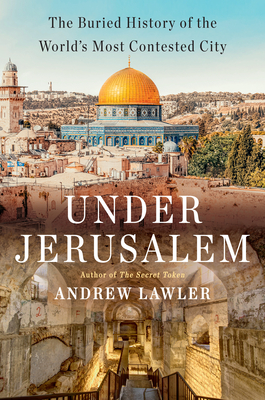 Under Jerusalem: The Buried History of the World's Most Contested City (Hardcover)


On Our Shelves Now at:
A spellbinding history of the hidden world below the Holy City—a saga of biblical treasures, intrepid explorers, and political upheaval

“A sweeping tale of archaeological exploits and their cultural and political consequences told with a historian’s penchant for detail and a journalist’s flair for narration.”
—Washington Post

In 1863, a French senator arrived in Jerusalem hoping to unearth relics dating to biblical times. Digging deep underground, he discovered an ancient grave that, he claimed, belonged to an Old Testament queen. News of his find ricocheted around the world, evoking awe and envy alike, and inspiring others to explore Jerusalem’s storied past.

In the century and a half since the Frenchman broke ground, Jerusalem has drawn a global cast of fortune seekers and missionaries, archaeologists and zealots, all of them eager to extract the biblical past from beneath the city’s streets and shrines. Their efforts have had profound effects, not only on our understanding of Jerusalem’s history, but on its hotly disputed present.  The quest to retrieve ancient Jewish heritage has sparked bloody riots and thwarted international peace agreements.  It has served as a cudgel, a way to stake a claim to the most contested city on the planet.  Today, the earth below Jerusalem remains a battleground in the struggle to control the city above.

Under Jerusalem takes readers into the tombs, tunnels, and trenches of the Holy City. It brings to life the indelible characters who have investigated this subterranean landscape. With clarity and verve, acclaimed journalist Andrew Lawler reveals how their pursuit has not only defined the conflict over modern Jerusalem, but could provide a map for two peoples and three faiths to peacefully coexist.
ANDREW LAWLER is author of the bestselling The Secret Token: Myth, Obsession, and the Search for the Lost Colony of Roanoke, and the acclaimed Why Did the Chicken Cross the World?: The Epic Saga of the Bird that Powers Civilization. His work has appeared in The New York Times, The Washington Post, National Geographic, and Smithsonian. He is a contributing writer for Science and a contributing editor for Archaeology. Lawler's work has appeared several times in The Best of Science and Nature Writing.

“In Under Jerusalem, journalist Andrew Lawler directs our contemplation away from the heavenly city, and down into the roots of history and faith. . . Mr. Lawler, unlike so many of his characters, navigates the terrain without offending the political or religious sensibilities of his subjects. . . In a city where the winner takes all, Mr. Lawler does an admirable job of striving for the diplomats’ ideal of ‘evenhandedness.’ ”
—Wall Street Journal

“Under Jerusalem is a brilliant, highly innovative history of the most contested city on the planet. Andrew Lawler uses these untold stories of archeological digs near and under Jerusalem’s sacred sites to convey all the colorful and violent and contentious history of the Israeli-Palestinian conflict. It is an astounding achievement—and a compulsive read.”
—Kai Bird, Pulitzer Prize–winning historian and author of The Outlier and The Good Spy

"Magisterial. . . [A] fast-paced adventury-story account. . . This is a spellbinding book—and a reminder that, just when one might have imagined that nothing new could be written about Jerusalem, there is still more to be found beneath its surface."
—Moment Magazine

"What lies beneath? Lawler knows. Evoking the sights, sounds, and smells of ancient and modern Jerusalem, he introduces the reader to a myriad of archaeologists and other colorful characters, all concerned with unearthing the ancient remains of the city, frequently while grappling with thorny modern political, ideological, and theological issues. A must read for anyone interested in either the history or archaeology of Jerusalem."
—Eric H. Cline, bestselling author of 1177 B.C.: The Year Civilization Collapsed

“Every review of Andrew Lawler's book about the wild archaeological history of Jerusalem will mention Indiana Jones. This is not because the characters he describes are much like Jones—they're much more obsessed, more bonkers, or more mendacious—but because the Indiana Jones stories are among the few examples we have of stories about archaeology that are pure fun. Well, now there is another one, just as swashbuckling as the Spielberg movies, but with the added advantage of being all true."
—Charles C. Mann, New York Times bestselling author of 1491 and The Wizard and the Prophet

“A sweeping tale of archaeological exploits and their cultural and political consequences told with a historian’s penchant for detail and a journalist’s flair for narration. . . [Lawler] displays remarkable evenhandedness in cataloguing the politicization of archaeology today. . . Lawler’s timely book [shows] how and why ordinary men and women, and great empires alike, continue to seek meaning in the dirt and debris beneath this magnetic, confounding city.”
—Washington Post

“Engrossing [and] exhaustively researched. . . This book may be non-fiction, but it reads like a fast-moving and suspenseful Indiana Jones thriller. . . A captivating exploration of a Jerusalem’s buried history.”
—The Times of Israel

“It’s hard to imagine a definitive book being written about such a complicated subject, but this one is as close as it gets. Lawler gives a comprehensive, even-handed, clear-headed story about one of the most argued over pieces of land on the earth. But this is no dry treatise. It’s more of an adventure story with the main characters being archeologists and treasure seekers. Lovers of Indiana Jones and the Raiders of the Lost Ark won’t be disappointed.”
—New York Journal of Books

“Lawler presents a cast of char­ac­ters and a pro­gres­sion of events that build one on anoth­er, much like the archae­o­log­i­cal lay­ers them­selves, and the dis­cov­er­ies he shows us beguile and amaze. . . Lawler’s prose and the spot­light he shines on the his­to­ry of each era make his account read like an excit­ing adven­ture sto­ry. . . Archae­ol­o­gy feels like a vital, rel­e­vant, far-reach­ing endeav­or shed­ding light on today’s head­lines and tomorrow’s world. . . Fascinating.”
—The Jewish Book Council

“Richly detailed, sensitively argued, and entertainingly written, this immersive history casts Jerusalem in a new light and reveals the tensions that meet at the intersection of science, politics, religion, and history. This fascinating, evenhanded chronicle is a treasure.”
—Publishers Weekly (starred review)

“This entertaining and carefully argued book shows that the archaeology of this ancient city cannot be divorced from the complex knot of its politics. Journalist Lawler is evenhanded in his treatment of the thorny issues of religion, jurisdiction, and cultural heritage in Jerusalem. . . At its heart, Under Jerusalem is a terrific story, bursting at the seams with dubiously legal digs and eccentric personalities.”
—Booklist

“[Lawler’s] writing is clear and engaging, whether detailing colorful characters seeking fame and fortune or recounting the history of the West Bank, and supported by research. . . This archeological exploration of Jerusalem will find a welcome audience among readers interest in or curious about the historic city.”
—Library Journal

"An archaeological journey through the millennia in the Holy Land underscores the tensions between the biblical narrative and the historical record. . . A leisurely, entertaining walk through the ages with a pleasant, knowledgeable guide."
—Kirkus Reviews