Art Restoration: The Culture, the Business, and the Scandal (Paperback) 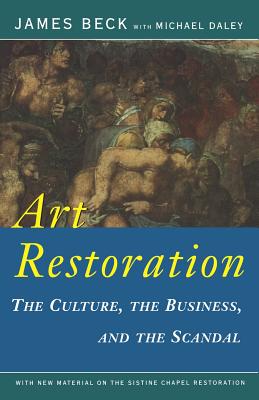 Art Restoration: The Culture, the Business, and the Scandal (Paperback)

“The book is fair. It attacks, not restorations (which is sometimes necessary, sometimes admirable), but insensitive restoration and ‘phoney’ discoveries.” —Times of London Higher Education Supplement

The world’s art heritage is under attack from the very people charged with its preservation, argues this important book, which has ignited controversy among art historians, curators, and restorers. In the world’s museums and in towns and cities throughout Europe, misguided restoration efforts are having irreversible, often tragic effects on masterpieces by Piero della Francesca, Leonardo da Vinci, Michelangelo, Raphael, Titian, and many other artists. What roles do aesthetic, institutional, and commercial factors play in the decision to restore a work of art? How can we prevent or halt projects in which a work of art is not restored but irreparably damaged? James Beck and Michael Daley explore these questions in the context of restoration projects in Florence, at the Sistine Chapel in Rome, and in museums in France, England, and the United States. They sound an alarm that must be heeded if we are to preserve the world’s art for future generations.