Wedding of the Waters: The Erie Canal and the Making of a Great Nation (Paperback) 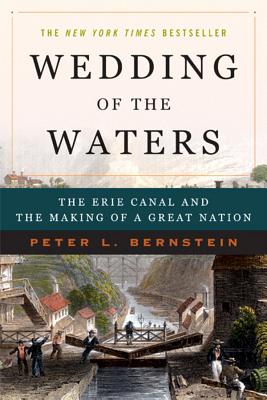 Wedding of the Waters: The Erie Canal and the Making of a Great Nation (Paperback)

The epic account of how one narrow ribbon of water forever changed the course of American history.

The history of the Erie Canal is a riveting story of American ingenuity. A great project that Thomas Jefferson judged to be “little short of madness,” and that others compared with going to the moon, soon turned into one of the most successful and influential public investments in American history.

In Wedding of the Waters, best-selling author Peter L. Bernstein recounts the canal’s creation within the larger tableau of a youthful America in the first quarter-century of the 1800s. Leaders of the fledgling nation had quickly recognized that the Appalachian mountain range was a formidable obstacle to uniting the Atlantic states with the vast lands of the west. A pathway for commerce as well as travel was critical to the security and expansion of the Revolution’s unprecedented achievement. Gripped by the same fever that had driven explorers such as Hudson and Champlain, a motley assortment of politicians, surveyors, and would-be engineers set out to build a complex structure of a type few of them had ever actually seen, let alone built or operated: a manmade waterway cut through the mountains to traverse the 363 miles between Lake Erie and the Hudson River. By linking the seas to the interior and the interior to the seas, these pioneers ultimately connected the Atlantic Ocean to the Mississippi River. Bernstein examines the social ramifications, political squabbles, and economic risks and returns of this mammoth project. He goes on to demonstrate how the canal’s creation helped bind the western settlers in the new lands to their fellow Americans in the original colonies, knitted the sinews of the American industrial revolution, and even influenced profound economic change in Europe.

Featuring a rich cast of characters that includes political visionaries like George Washington, Thomas Jefferson, and Martin van Buren; the canal’s most powerful champions, Governor DeWitt Clinton and Gouverneur Morris; and a huge platoon of Irish and American diggers, Wedding of the Waters reveals that the twenty-first-century themes of urbanization, economic growth, and globalization can all be traced to the first great macroengineering venture of American history.

Peter L. Bernstein (1919—2009), was an American economist and financial historian. Bernstein's ten books include the worldwide bestseller Against the Gods: The Remarkable Story of Risk. He also wrote countless articles in professional journals such as Harvard Business Review, Financial Analysts Journal and, in the popular press, including The New York Times, The Wall Street Journal, Worth magazine and Bloomberg.
Wedding of the Waters is an important window into a vital and too often neglected period in the American past

Bernstein resists the temptation to say…that the Erie canal ‘changed the world,’ but it did. It is almost impossible to imagine what the country would be like had it not been built. Peter Bernstein does it full justice.
— Jonathan Yardley - Washington Post

Bernstein’s economic analysis lucidly conveys the enormous impact of the Erie Canal and explains its crucial role in bringing about the industrial emergence of the young nation.
— Chuck Leddy - San Francisco Chronicle

The story behind the canal’s construction is a narrative of political intrigue, bold vision and backbreaking work. And it all comes to life in Peter L. Bernstein’s epic history of the canal.
— Terry Golway - New York Post

Mr Bernstein is at his best in showing how a colorful group of American politicians turned this dream into reality…The book provides a splendid window into early American life, which was as raucously divided then as it is now by class and taste.
— The Economist

A riveting account of one of the most amazing technological achievements of all time.
— Thomas J. Brady - Philadelphia Inquirer

An excellent overview of the struggles that went into making the Erie Canal a reality.
— Josh Ozersky - Chicago Tribune