Comfort: A Journey Through Grief (Paperback) 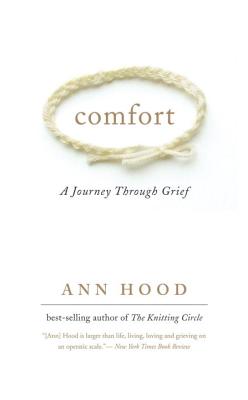 Comfort: A Journey Through Grief (Paperback)

“Rarely do memoirs of grief combine anguish, love, and fury with such elegance.” — Entertainment Weekly

In 2002, Ann Hood’s five-year-old daughter Grace died suddenly from a virulent form of strep throat. Stunned and devastated, the family searched for comfort in a time when none seemed possible. Hood—an accomplished novelist—was unable to read or write. She could only reflect on her lost daughter—“the way she looked splashing in the bathtub ... the way we sang ‘Eight Days a Week.’” One day, a friend suggested she learn to knit. Knitting soothed her and gave her something to do. Eventually, she began to read and write again. A semblance of normalcy returned, but grief, in ever new and different forms, still held the family. What they could not know was that comfort would come, and in surprising ways. Hood traces her descent into grief and reveals how she found comfort and hope again—a journey to recovery that culminates with a newly adopted daughter.

Ann Hood is the author of eleven books, including the best-selling novels The Book That Matters Most and The Knitting Circle, and the memoirs Comfort: A Journey Through Grief and Kitchen Yarns: Notes on Life, Love, and Food. She lives in Providence, Rhode Island, and New York City.
Comfort is novelist Ann Hood’s utterly harrowing, completely spellbinding memoir of losing her five-year-old daughter, Grace, to a rare form of strep in 2002. . . . [A] spare, gorgeously serpentine narrative. . . . Unforgettable.

Comfort enriches our lives. . . . I will most likely never eat pasta with butter and Parmesan or cucumbers cut in perfect rounds . . . without thinking of Ann Hood and her daughter. And I have never met either one.

In graceful prose, Comfort bears witness to the heartbreaking particularity of her—of any—loss.