The End of Empire: Attila the Hun & the Fall of Rome (Paperback) 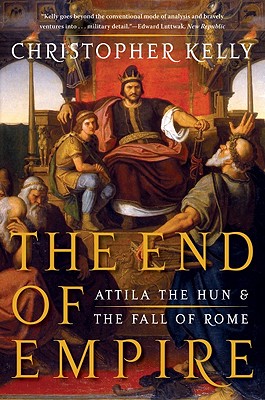 The End of Empire: Attila the Hun & the Fall of Rome (Paperback)

"A thoughtful and sophisticated account of a notoriously complicated and controversial period." —R. I. Moore, Times Literary Supplement

History remembers Attila, the leader of the Huns, as the Romans perceived him: a savage barbarian brutally inflicting terror on whoever crossed his path. Following Attila and the Huns from the steppes of Kazakhstan to the court of Constantinople, Christopher Kelly portrays Attila in a compelling new light, uncovering an unlikely marriage proposal, a long-standing relationship with a treacherous Roman general, and a thwarted assassination plot. We see Attila as both a master warrior and an astute strategist whose rule was threatening but whose sudden loss of power was even more so. The End of Empire is an original exploration of the clash between empire and barbarity in the ancient world, full of contemporary resonance.

Christopher Kelly, a professor of classics and ancient history and a Fellow and Director of studies in classics at Corpus Christi College at the University of Cambridge, where he received his PhD in classics. He lives in Cambridge, England, and Chicago, Illinois.
Kelly goes beyond the conventional mode and bravely ventures into…military detail.
— Edward Luttwak - New Republic

Accessible history that enlightens as well as informs.
— Richmond Times

Christopher Kelly…grapples with the delicate task of reconstructing the scant evidence on Attila, without elevating him to warm and fuzzy proportions or caving in to the view of British historians of the barbarian school or the German totemmakers of Hunnensturm…Kelly captures the tension with an assured style.
— Jonathan E. Lazarus - Star-Ledger

Written with a rare combination of profound professional knowledge…and a novelist's sensitivity to every nuance of scene and character.
— Paul Cartledge, Cambridge University

[A] first-rate history [that] provides a singularly fresh look at a factitious period in the life of Ancient Rome.
— Publishers Weekly