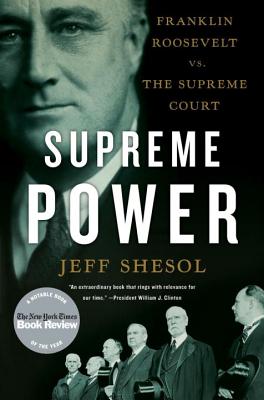 "A stunning work of history."—Doris Kearns Goodwin, author of No Ordinary Time and Team of Rivals

Beginning in 1935, the Supreme Court's conservative majority left much of FDR's agenda in ruins. The pillars of the New Deal fell in short succession. It was not just the New Deal but democracy itself that stood on trial. In February 1937, Roosevelt struck back with an audacious plan to expand the Court to fifteen justices—and to "pack" the new seats with liberals who shared his belief in a "living" Constitution.

Jeff Shesol is the author of Supreme Power and Mutual Contempt, both selected as New York Times Notable Books of the Year. He is a former speechwriter for President Bill Clinton and is a founding partner of West Wing Writers.
One of the most eloquent historians of his generation, Jeff Shesol has a deep understanding of the presidency, and the interplay of politics, personalities, and principles, all of which he brings to life in this rich, remarkable book.
— President Bill Clinton