The Birth of the Pill: How Four Crusaders Reinvented Sex and Launched a Revolution (Paperback) 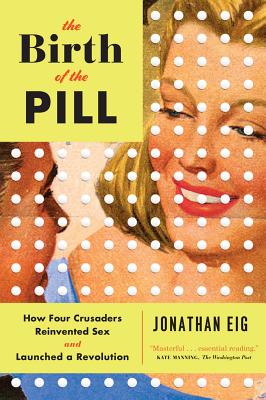 The Birth of the Pill: How Four Crusaders Reinvented Sex and Launched a Revolution (Paperback)

The fascinating story of one of the most important scientific discoveries of the twentieth century.

We know it simply as "the pill," yet its genesis was anything but simple. Jonathan Eig's masterful narrative revolves around four principal characters: the fiery feminist Margaret Sanger, who was a champion of birth control in her campaign for the rights of women but neglected her own children in pursuit of free love; the beautiful Katharine McCormick, who owed her fortune to her wealthy husband, the son of the founder of International Harvester and a schizophrenic; the visionary scientist Gregory Pincus, who was dismissed by Harvard in the 1930s as a result of his experimentation with in vitro fertilization but who, after he was approached by Sanger and McCormick, grew obsessed with the idea of inventing a drug that could stop ovulation; and the telegenic John Rock, a Catholic doctor from Boston who battled his own church to become an enormously effective advocate in the effort to win public approval for the drug that would be marketed by Searle as Enovid.

Spanning the years from Sanger’s heady Greenwich Village days in the early twentieth century to trial tests in Puerto Rico in the 1950s to the cusp of the sexual revolution in the 1960s, this is a grand story of radical feminist politics, scientific ingenuity, establishment opposition, and, ultimately, a sea change in social attitudes. Brilliantly researched and briskly written, The Birth of the Pill is gripping social, cultural, and scientific history.

Jonathan Eig, a former reporter at the Wall Street Journal, is the best-selling author of The Birth of the Pill, Luckiest Man, Opening Day, and Get Capone. He lives in Chicago with his wife and children.
Eig’s nimbly paced cultural history shows that the pill’s genesis was anything but simple.
— New York Times (Editor’s Choice)

A tale of scientific progress and social change as engaging and gripping as any suspense novel.
— Molly Langmuir - Elle

Fascinating… Weaving medical, corporate, and political history with rich biographical detail, Eig turns the history of the pill into a scientific suspense story full of profoundly human characters. The result is cultural history at its finest.
— Alan W. Petrucelli - Examiner.com

Jonathan Eig turns the history of the pill into a smart and spicy account of the unlikely bonds that linked a millionaire activist, a free-loving crusader, a Roman Catholic gynecologist, and a maverick scientist. The Birth of the Pill is at once intelligent, well researched, witty, and captivating… [A] unique prism into the changing morals about sex, women, and marriage in 20th century America.

— Randi Hutter Epstein, author of Get Me Out: A History of Childbirth from the Garden of Eden to the Sperm Bank

A fascinating look into the evolution of medical practices, funding and ethics [and] an intricate portrait of how completely women’s reproductive lives are woven into our culture in disturbing and contradictory ways.
— Ashley Nelson - San Francisco Chronicle

Dynamic, highly engrossing… As hard as it is to put down The Birth of the Pill’s story of four privileged individuals’ thrilling quest for better living through science, it’s imperative to remember the scores of women lost to history whose flesh and blood helped make it a reality.

The pill is utterly ordinary today. The story of how we got here is anything but.
— Hannah Levintova - Mother Jones

Narrative nonfiction at its best… A fascinating and thorough look at one of the most important innovations of the 20th century.
— Bookriot

Who knew that the history of oral contraceptives could rival a good procedural drama, with a scrappy group of believers racing against time?
— Meredith Counts - Bust

Absorbing… One of the book’s great strengths—accomplished through his smart choice of lead characters—is the depiction of how arduous it is to make real social change.
— Margaret Talbot - New Yorker

Aside from being a fascinating look into the evolution of medical practices, funding and ethics, Eig’s book is an intricate portrait of how completely women’s lives are weaved into our culture in disturbing and contradictory ways.
— San Francisco Chronicle

Detailed, compelling history… Eig does a remarkable job of keeping the science and the storytelling in harmony.
— Josh Modell - The Onion A.V. Club