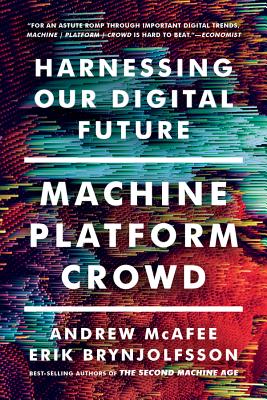 “A clear and crisply written account of machine intelligence, big data and the sharing economy. But McAfee and Brynjolfsson also wisely acknowledge the limitations of their futurology and avoid over-simplification.” —Financial Times

In The Second Machine Age, Andrew McAfee and Erik Brynjolfsson predicted some of the far-reaching effects of digital technologies on our lives and businesses. Now they’ve written a guide to help readers make the most of our collective future. Machine | Platform | Crowd outlines the opportunities and challenges inherent in the science fiction technologies that have come to life in recent years, like self-driving cars and 3D printers, online platforms for renting outfits and scheduling workouts, or crowd-sourced medical research and financial instruments.

Andrew McAfee is the co-director of the MIT Initiative on the Digital Economy and co-author of the best-selling The Second Machine Age and Machine, Platform, Crowd: Harnessing Our Digital Future. He and co-author Erik Brynjolfsson are the only people named to both the Thinkers 50 list of the world’s top management thinkers and the Politico 50 group of people transforming American politics.

Erik Brynjolfsson is the director of the MIT Initiative on the Digital Economy and Schussel Family Professor of Management Science at the MIT Sloan School. He is the author of several best-selling books with co-author Andrew McAfee, and one of the world’s most cited scholars in information systems and economics.
A book for managers whose companies sit well back from the edge and who would like a digestible introduction to technology trends that may not have reached their doorstep—yet.
— Wall Street Journal

The story is warmly and richly told.… This book is in many senses a primer, a thorough grounding for the digital warrior in the driving forces of the 21st-century economy.
— Times Higher Education

Even Silicon Valley is surprised by the speed and scope of change today. The best way to stay on top of it is to understand the principles that will endure even as so much gets disrupted. This book is the best explanation of those principles out there.
— Eric Schmidt, former CEO of Google and former executive chairman of Alphabet Inc.

The digital revolution we’re entering can be unsettling, but McAfee and Brynjolfsson show how these incredibly powerful technologies will make our choices more important than ever. Machine | Platform | Crowd is a road map for leaders to make wise choices as they navigate this new world.

— Arianna Huffington, former president and editor-in-chief of the Huffington Post Media Group, author of Thrive and The Sleep Revolution

On their own, AI, platforms, and crowds are all transformative forces. That they’re evolving in parallel means we’re beginning to experience a new era of networked disruption, where productive but disorienting change becomes the status quo. For citizens, entrepreneurs, companies, and governments who want to successfully navigate this new world, the first step lies in finding reliable and prescient guides. Andrew and Erik are two of the best.
— Reid Hoffman, partner at Greylock Partners and cofounder of LinkedIn

The authors aptly illustrate how the extraordinary progress of technology is reshaping our lives, and they share powerful ideas relevant to world leaders.… The book is a must-read for policymakers who seek a road map for how to combine the strengths of humanity and technology to build a better future for their citizens.
— Christine Lagarde, managing director of the International Monetary Fund

The authors explain the whys and hows soberly, answering just about every question on AI you could ask: which channels it will colonise next, whether we’ll still need physical products in a virtual world and how Bitcoin will change commerce, among others. Throughout, they are eloquent and informed. They don’t think humans will be obsolete, but they also don't pretend the solutions are simple.
— People Management

[McAfee and Brynjolfsson] have done us all a great service in explaining some of the powerful trends that will shape our future.
— Mark Cliffe, chief economist of the ING Group

McAfee and Brynjolfsson are thoughtful observers of the emerging technological revolution which they described in their earlier The Second Machine Age.… They write clearly and are at their most devastating in analyzing how the various elements of the new age combine, wiping out large sectors of media, retail and music industries as they have gone.