Army of None: Autonomous Weapons and the Future of War (Paperback) 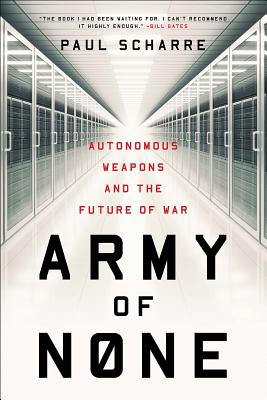 Army of None: Autonomous Weapons and the Future of War (Paperback)

"The book I had been waiting for. I can't recommend it highly enough." —Bill Gates

The era of autonomous weapons has arrived. Today around the globe, at least thirty nations have weapons that can search for and destroy enemy targets all on their own. Paul Scharre, a leading expert in next-generation warfare, describes these and other high tech weapons systems—from Israel’s Harpy drone to the American submarine-hunting robot ship Sea Hunter—and examines the legal and ethical issues surrounding their use. “A smart primer to what’s to come in warfare” (Bruce Schneier), Army of None engages military history, global policy, and cutting-edge science to explore the implications of giving weapons the freedom to make life and death decisions. A former soldier himself, Scharre argues that we must embrace technology where it can make war more precise and humane, but when the choice is life or death, there is no replacement for the human heart.

Paul Scharre is a former U.S. Army Ranger who served in Iraq and Afghanistan. The author of the award-winning study of autonomous weapons, Army of None, he is currently vice president and director of studies at the Center for a New American Security. He lives in Virginia.
A tour de force of the future of war technology…A highly readable journey through the world of robots on the battlefield and beyond.
— P.W. Singer, author of Wired for War and Ghost Fleet

One of the most interesting books on military affairs that I have read in some time.
— Thomas E. Ricks - New York Times Book Review

A must-read for anyone interested in AI and the future of warfare.
— Task & Purpose

An authoritative and sobering perspective on the automated battlefields that will very soon come to characterize military conflict.
— Science

Army of None delivers what will likely be the most important general-audience book on this topic for at least the next decade.

A one-stop guide book to the debates, the challenges, and yes, the opportunities that can come from autonomous warfare.
— Techcrunch

A sober, policy-focused primer on what is coming…written in an interesting and accessible manner.
— War on the Rocks