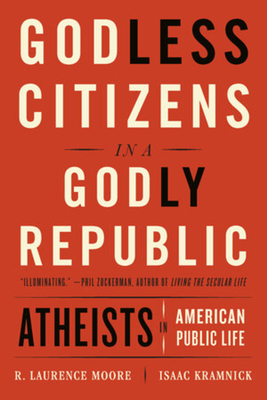 If the First Amendment protects the separation of church and state, why have atheists had to fight for their rights? In this valuable work, R. Laurence Moore and Isaac Kramnick reveal the fascinating history of atheism in America and the legal challenges to federal and state laws that made atheists second-class citizens.

Isaac Kramnick is professor emeritus of government at Cornell University.

R. Laurence Moore is professor emeritus of history and American studies at Cornell University
A thorough and useful history of the legal and political status of atheists in America.
— Casey Cep - The New Yorker

Godless Citizens in a Godly Republic provides exactly what we need more of from historians but so rarely get: accessible, well-written prose combined with scholarly discipline in the service of a contemporary issue badly in need of light rather than heat.

— Eric Alterman, author of Inequality and One City

R. Laurence Moore and Isaac Kramnick trace the often-shocking history of atheism in America. In a nation dedicated to the separation of church and state, we have seen furious battles over compulsory school prayer, discrimination against nonbelievers, and continuing efforts to declare this to be ‘a Christian nation.’ Moore and Kramnick bring to life a continuing struggle to make this nation what the Founders intended it to be.
— Geoffrey R. Stone, author of Sex and the Constitution

As American demographics trend increasingly secular, religious conservatives are trying harder than ever to define the nation’s law and politics in their terms. Meanwhile, seeing secularism under attack, nonbelievers are standing up and speaking out as never before. Godless Citizens in a Godly Republic provides unique and valuable insight into these culture wars.

[An] alternative history of the country, focused on the nonbelievers.
— New York Times Book Review

Godless Citizens is a well-considered, well-written, and arguably important book. It should be read by anyone who sees themselves as having had to live on the short end of things in an America fighting at any cost to be defined as Christian. Moore and Kramnick give us ample reason to take heart.
— Daniel Thomas Moran - Humanist

A fascinating look at atheism in America.
— National Book Review

This compact and thorough work is a perfect introduction to atheism in America.
— Booklist

An impassioned review of the demands of a little-considered minority.
— Kirkus Reviews