The Season: A Social History of the Debutante (Paperback) 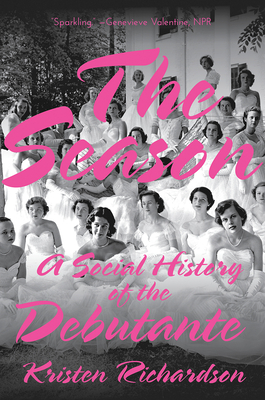 The Season: A Social History of the Debutante (Paperback)

A Smithsonian Best History Book of 2019

Kristen Richardson traces the social seasons of debutantes on both sides of the Atlantic, sharing their stories in their own words, through diaries, letters, and interviews conducted at contemporary balls. Richardson takes the reader from Georgian England to colonial Philadelphia, from the Antebellum South and Wharton’s New York to the reimagined rituals of African American communities. Originally conceived as a way to wed daughters to suitable men, debutante rituals have adapted and evolved as marriage and women’s lives have changed. An inquiry into the ritual’s enduring cultural significance, The Season also reveals the complex emotional world of the girls at its center, whose every move was scrutinized and judged, and on whose backs family fortunes rested.

Kristen Richardson was born in London, England, and lives with her son in Brooklyn, New York.
Richardson writes sharply and with greatest wit and enthusiasm of the debutante ritual’s importance.
— Lucy Tiven - Washington Post

Sharply observed and oddly timely, this history of the debutante ball explores a ritual whose social and historical significance has often been overlooked.… Richardson delves into a variety of fascinating deb scenes.
— The New Yorker

An immersive history, and one with remarkable empathy for the women populating it.
— Maitreyi Anantharaman - Lit Hub

Kristen Richardson writes so gracefully, and tells a story of courtship and marriage I knew nothing about and found fascinating.
— Ira Glass, host of This American Life

[Kristen] Richardson’s sharp account of how the season evolved… is a more absorbing story than any period drama.
— Cordelia Jenkins - Financial Times

Class power has never been about wealth alone. As Kristen Richardson skillfully and colorfully documents, the marriage market—and the courtly ritual of the debutante—lays open a long, troubling, transatlantic history. This engaging book reminds us that ‘mock royalty’ and the trophy daughter, whether it’s Consuelo Vanderbilt in 1894 or Ivanka Trump more recently, are at the center of America’s love affair with the rich and beautiful.
— Nancy Isenberg, author of White Trash: The 400–Year Untold History of Class in America