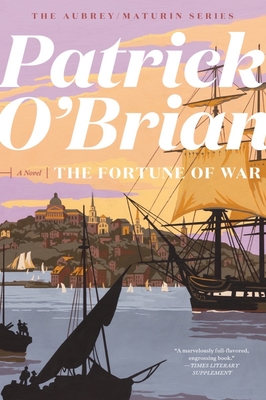 This is book number 6 in the Aubrey/Maturin Novels series.

"A marvelously full-flavored, engrossing book, which towers over its current rivals in the genre like a three-decker over a ship's longboat." —Times Literary Supplement

Captain Jack Aubrey arrives in the Dutch East Indies to find himself appointed to the command of the fastest and best-armed frigate in the British Navy. He and his friend, surgeon Stephen Maturin, take passage for England in a dispatch vessel. But before they can reach their destination, the War of 1812 breaks out. Bloody conflict precipitates them into new and unexpected predicaments where Maturin is reunited with his embattled love, Diana Villiers, and his past activities as a secret agent blow back on him with a vengeance.

One of our greatest contemporary novelists, Patrick O’Brian is the author of the twenty volumes of the best-selling Aubrey/Maturin series, as well as many other books, including Testimonies, The Golden Ocean, The Unknown Shore, and biographies of Joseph Banks and Picasso.
The Aubrey-Maturin novels are by a long shot the best things of their kind…they are uniquely excellent.
— Terry Teachout - New York Times Book Review

I fell in love with [O’Brian’s] writing straightaway…It’s about friendship, camaraderie. Jack Aubrey and Stephen Maturin always remind me a bit of Mick and me.
— Keith Richards

No one else writing in the genre today can match [O’Brian’s] erudition, humour, inventiveness and flair.
— Kevin Myers - Irish Independent