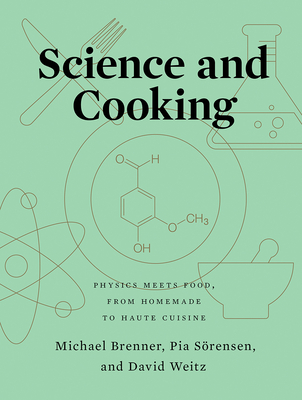 Based on the popular Harvard University and edX course, Science and Cooking explores the scientific basis of why recipes work.

The spectacular culinary creations of modern cuisine are the stuff of countless articles and social media feeds. But to a scientist they are also perfect pedagogical explorations into the basic scientific principles of cooking. In Science and Cooking, Harvard professors Michael Brenner, Pia Sörensen, and David Weitz bring the classroom to your kitchen to teach the physics and chemistry underlying every recipe.

Why do we knead bread? What determines the temperature at which we cook a steak, or the amount of time our chocolate chip cookies spend in the oven? Science and Cooking answers these questions and more through hands-on experiments and recipes from renowned chefs such as Christina Tosi, Joanne Chang, and Wylie Dufresne, all beautifully illustrated in full color. With engaging introductions from revolutionary chefs and collaborators Ferran Adria and José Andrés, Science and Cooking will change the way you approach both subjects—in your kitchen and beyond.

Michael Brenner is a professor of applied mathematics and physics at Harvard University. He cofounded the undergraduate class Science and Cooking in 2010. He lives in Cambridge, Massachusetts.

Pia Sörensen is a teaching professor of chemical engineering and applied materials at Harvard University. She cofounded the undergraduate class Science and Cooking in 2010. She lives in Cambridge, Massachusetts.

David Weitz is a professor of physics and applied physics at Harvard University. He cofounded the undergraduate class Science and Cooking in 2010. He lives in Cambridge, Massachusetts.
One part Food Network, one part Mr. Science, two big handfuls of DIY, and…a whole lot of fun.
— April Fulton, NPR, on the Science and Cooking course