Mama's Last Hug: Animal Emotions and What They Tell Us about Ourselves (Hardcover) 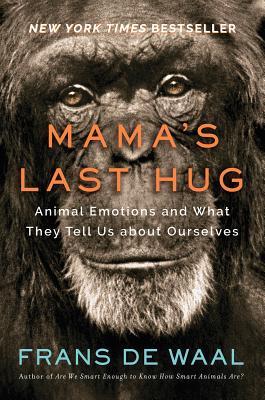 Mama's Last Hug: Animal Emotions and What They Tell Us about Ourselves (Hardcover)

Frans de Waal has spent four decades at the forefront of animal research. Following up on the best-selling Are We Smart Enough to Know How Smart Animals Are?, which investigated animal intelligence, Mama’s Last Hug delivers a fascinating exploration of the rich emotional lives of animals.

Mama’s Last Hug begins with the death of Mama, a chimpanzee matriarch who formed a deep bond with biologist Jan van Hooff. When Mama was dying, van Hooff took the unusual step of visiting her in her night cage for a last hug. Their goodbyes were filmed and went viral. Millions of people were deeply moved by the way Mama embraced the professor, welcoming him with a big smile while reassuring him by patting his neck, in a gesture often considered typically human but that is in fact common to all primates. This story and others like it form the core of de Waal’s argument, showing that humans are not the only species with the capacity for love, hate, fear, shame, guilt, joy, disgust, and empathy.

De Waal discusses facial expressions, the emotions behind human politics, the illusion of free will, animal sentience, and, of course, Mama’s life and death. The message is one of continuity between us and other species, such as the radical proposal that emotions are like organs: we don’t have a single organ that other animals don’t have, and the same is true for our emotions. Mama’s Last Hug opens our hearts and minds to the many ways in which humans and other animals are connected, transforming how we view the living world around us.

Game-changing....For too long, emotion has been cognitive researchers’ third rail....But nothing could be more essential to understanding how people and animals behave. By examining emotions in both, this book puts these most vivid of mental experiences in evolutionary context, revealing how their richness, power and utility stretch across species and back into deep time....The book succeeds most brilliantly in the stories de Waal relates.
— Sy Montgomery - The New York Times Book Review

An original thinker, [de Waal] seems to invite us to his front-row seats, sharing the popcorn as he gets us up to speed on the plot of how life works, through deeply affecting stories of primates and other animals, all dramas with great lessons for our own species.
— Vicki Constantine Croke - Boston Globe

De Waal’s conversational writing is at times moving, often funny and almost always eye-opening....It’s hard to walk away from Mama’s Last Hug without a deeper understanding of our fellow animals and our own emotions.

A captivating and big-hearted book, full of compassion and brimming with insights about the lives of animals, including human ones.
— Yuval Noah Harari, New York Times best-selling author of Sapiens: A Brief History of Humankind

Before I realized Frans de Waal’s connection to Mama’s actual last hug, I sent the online video link to a large group of scientists saying, ‘I believe it is possible to view this interaction and be changed forever.’ Likewise, I believe that anyone reading this book will be changed forever. De Waal has spent so many decades watching intently and thinking deeply that he sees a planet that is deeper and more beautiful than almost anyone realizes. In these pages, you can acquire and share his beautiful, shockingly insightful view of life on Earth.
— Carl Safina, author of Beyond Words: What Animals Think and Feel

I doubt that I've ever read a book as good as Mama's Last Hug, because it presents in irrefutable scientific detail the very important fact that animals do have these emotions as well as the other mental features we once attributed only to people. Not only is the book exceedingly important, it's also fun to read, a real page-turner. I can't say enough good things about it except it's utterly splendid.

Frans de Waal is one of the most influential primatologists to ever walk the earth, changing the way we think of human nature by exploring its continuity with other species. He does this again in the wonderful Mama’s Last Hug, an examination of the continuum between emotion in humans and other animals. This subject is rife with groundless speculation, ideology, and badly misplaced folk intuition, and de Waal ably navigates it with deep insight, showing the ways in which our emotional lives are shared with other primates. This is an important book, wise and accessible.

— Robert Sapolsky, author of Behave: The Biology of Humans at Our Best and Worst

In Mama’s Last Hug, Frans de Waal marshals his wealth of knowledge and experience, toggling expertly between rigorous science and captivating anecdote to explain animal behavior—humans included. While doing so, he rebukes the common conceit that we are necessarily better, or smarter, than our closest relatives.

— Jonathan Balcombe, author of What a Fish Knows