The Planter of Modern Life: How an Ohio Farm Boy Conquered Literary Paris, Fed the Lost Generation, and Sowed the Seeds of the Organic Food Movement (Paperback) 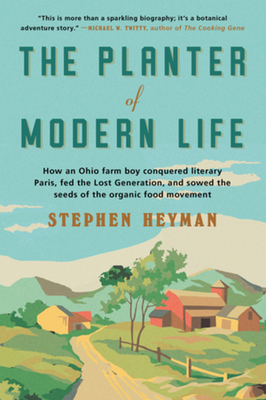 The Planter of Modern Life: How an Ohio Farm Boy Conquered Literary Paris, Fed the Lost Generation, and Sowed the Seeds of the Organic Food Movement (Paperback)

Longlisted for the 2021 Plutarch Award

How a leading writer of the Lost Generation became America’s most famous farmer and inspired the organic food movement.

Louis Bromfield was a World War I ambulance driver, a Paris expat, and a Pulitzer Prize–winning novelist as famous in the 1920s as Hemingway or Fitzgerald. But he cashed in his literary success to finance a wild agrarian dream in his native Ohio. The ideas he planted at his utopian experimental farm, Malabar, would inspire America’s first generation of organic farmers and popularize the tenets of environmentalism years before Rachel Carson’s Silent Spring.

A lanky Midwestern farm boy dressed up like a Left Bank bohemian, Bromfield stood out in literary Paris for his lavish hospitality and his green thumb. He built a magnificent garden outside the city where he entertained aristocrats, movie stars, flower breeders, and writers of all stripes. Gertrude Stein enjoyed his food, Edith Wharton admired his roses, Ernest Hemingway boiled with jealousy over his critical acclaim. Millions savored his novels, which were turned into Broadway plays and Hollywood blockbusters, yet Bromfield’s greatest passion was the soil.

In 1938, Bromfield returned to Ohio to transform 600 badly eroded acres into a thriving cooperative farm, which became a mecca for agricultural pioneers and a country retreat for celebrities like Humphrey Bogart and Lauren Bacall (who were married there in 1945).

This sweeping biography unearths a lost icon of American culture, a fascinating, hilarious and unclassifiable character who—between writing and plowing—also dabbled in global politics and high society. Through it all, he fought for an agriculture that would enrich the soil and protect the planet. While Bromfield’s name has faded into obscurity, his mission seems more critical today than ever before.

Stephen Heyman has written for the New York Times, Slate, Vogue, and many other publications. He is the recipient of fellowships from the Leon Levy Center for Biography and the National Endowment for the Humanities. He lives in Pittsburgh.
Heyman applies keen narrative skills to tell the story of Bromfield’s celebrity-studded life—two lives, really—as an author and farmer. The result is a rattling good yarn.
— Barry Estabrook - The Wall Street Journal

The Planter of Modern Life is an inspiriting read in its entirety—the kind that restores your faith in the humans that make humanity.

Inspirational...Bromfield’s original insight was seeing the crucial importance of soil health before science really understood why this matters, or how to build it.
— David R. Montgomery - Nature

Mesmerizing. Abounding in wit, insight, elegance, and narrative talent, The Planter of Modern Life is at once terribly entertaining and subtly illuminating—rather like Bromfield himself, a man at ease in the most rarified Parisian gatherings and bumping along on a tractor on his Ohio farm. This original, ardent visionary of the American environmental future still has much to teach us.

This is more than a sparkling biography; it’s a botanical adventure story of a full, plant-based bohemian life, following the journey of a modern Johnny Appleseed from Ohio to World War I France to Hollywood to our dinner plates.
— Michael W. Twitty, author of The Cooking Gene

The astounding tale of Louis Bromfield, a rare and accomplished figure who has vanished from collective memory, despite his importance to issues ranging from organic food to the ephemeral nature of fame. An engaging and fascinating book on many levels.
— Mark Kurlansky, author of Cod and Salt

If Stephen Heyman had written Louis Bromfield’s life as a novel, readers would have found the tale too tall to believe.
— Deirdre Bair, author of Parisian Lives

A brilliant, engaging read about the life of a literary icon and, until now, unrecognized founder of the organic movement.
— Dan Barber, chef of Blue Hill at Stone Barns, author of The Third Plate

I couldn’t put this book down. In this wonderful biography, Stephen Heyman pulls the curtain back so those of us who practically idolized this bigger-than-life soil spokesman can finally understand the complicated man behind the legend.
— Joel Salatin, founder of Polyface Farm, author of Folks, This Ain’t Normal

Heyman turns the story of this novelist, screenwriter, nonfiction author, and pioneering farmer into an utterly engrossing account of both his life and his times…[The Planter of Modern Life] is a biography of dual landscapes—literary and pastoral—as much as a chronicle of a man…An outstanding debut.

In this delightful and exhilarating page-turner…Heyman does an impressive job of combining all of Bromfield’s interests into a cohesive narrative that captivates as both intriguing history and a significant look at early environmentalism.
— Booklist (starred review)