Now You See It, Now You Don't!: Lessons in Sleight of Hand (Paperback) 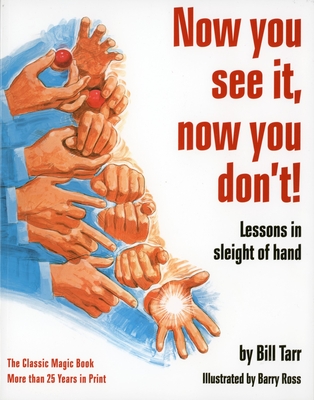 Now You See It, Now You Don't!: Lessons in Sleight of Hand (Paperback)


Special Order—Subject to Availability
A new and simple learn-by-picture method that makes it easy for anyone aged twelve and up to perform all the classic sleights just as they are done by the world's greatest professional magicians. Long-time magician Bill Tarr has teamed up with Barry Ross, an illustrator famous for his instructional sports diagrams, for easy-to-follow, step-by-step instructions, so that with the help of more than 1,500 line drawings that capture each eye-fooling movement, you'll learn everything from simple sleights you can master in minutes to the great classics of magic. With ordinary objects -- a regular deck of cards, a coin from someone's pocket, a few balls of crumpled aluminum foil -- you'll soon be doing ...

Springing the Cards from Hand-to-Hand

The Cups and Balls

The Cut and Restored Rope

and dozens and dozens of the world's greatest sleight-of-hand effects!
Like a great many magicians, William Tarr was interested in magic from a very early age. He did his first tricks at the age of nine, spent the greater part of his youth with a deck of cards in his hand, and eventually did a manipulative act—cards, billiard balls, and cigarettes—professionally. After a hitch in the navy he entered the arts, and for many years was a dedicated full-time sculptor. He was a former Guggenheim fellow, a Municipal Art Society Award winner, and the creator of several of America’s largest sculptures: the Martin Luther King Jr. Memorial, the huge Morningside Heights, and some 12 other works in New York City.