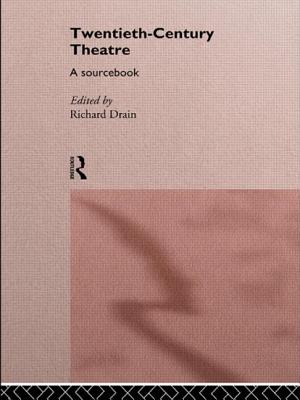 Twentieth Century Theatre: A Sourcebook is an inspired handbook of ideas and arguments on theatre. Richard Drain gathers together a uniquely wide-ranging selection of original writings on theatre by its most creative practitioners - directors, playwrights, performers and designers, from Jarry to Grotowski and Craig. These key texts span the twentieth century, from the onset of modernism to the present, providing direct access to the thinking behind much of the most stimulating theatre the century has had to offer, as well as guidelines to its present most adventurous developments.
Setting theory beside practice, these writings bring alive a number of vital and continuing concerns, each of which is given full scope in five sections which explore the Modernist, Political, Inner and Global dimensions of twentieth century theatre.
Twentieth Century Theatre: A Sourcebook provides illuminationg perspectives on past history, and throws fresh light on the sources and development of theatre today. This sourcebook is not only an essential and versatile collection for students at all levels, but also directed numerous devised shows which have toured to theatres, schools, community centres and prisons.