Re-Dressing the Canon: Essays on Theatre and Gender (To Philosophy) (Paperback) 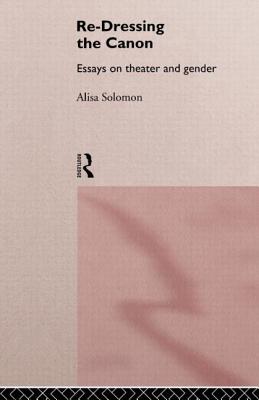 Re-Dressing the Canon: Essays on Theatre and Gender (To Philosophy) (Paperback)

Re-Dressing the Canon examines the relationship between gender and performance in a series of essays which combine the critique of specific live performances with an astute theoretical analysis. Alisa Solomon discusses both canonical texts and contemporary productions in a lively jargon-free style. Among the dramatic texts considered are those of Aristophanes, Ibsen, Yiddish theatre, Mabou Mines, Deborah Warner, Shakespeare, Brecht, Split Britches, Ridiculous Theatre, and Tony Kushner.
Bringing to bear theories of 'gender performativity' upon theatrical events, the author explores:
* the 'double disguise' of cross-dressed boy-actresses
* how gender relates to genre (particularly in Ibsens' realism)
* how canonical theatre represented gender in ways which maintain traditional images of masculinity and femininity.

Alisa Soloman is a theatre ciritic, teacher and dramaturg in New York City. She is Associate Professor of English and Theatre at CUNY and a staff writer at the Village Voice.