Shakespeare in the Present (Accents on Shakespeare) (Paperback) 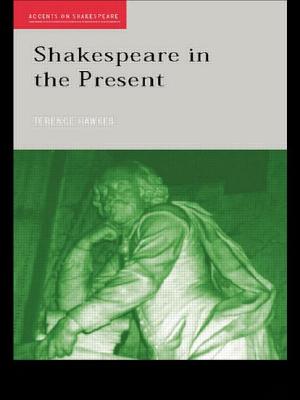 Shakespeare in the Present (Accents on Shakespeare) (Paperback)

Shakespeare in the Present is a stunning collection of essays by Terence Hawkes, which engage with, explain, and explore 'presentism'. Presentism is a critical manoeuvre which uses relevant aspects of the contemporary as a crucial trigger for its investigations. It deliberately begins with the material present and lets that set the interrogative agenda. This book suggests ways in which its principles may be applied to aspects of Shakespeare's plays.
Hawkes concentrates on two main areas in which Presentism impacts on the study of Shakespeare. The first is the concept of 'devolution' in British politics. The second is presentism's commitment to a reversal of conceptual hierarchies such as primary/secondary and past/present, and the interaction between performance and reference. The result is to sophisticate and expand our notion of performing and to refocus interest on what the early modern theatre meant by the activity it termed 'playing'.

Terence Hawkes is Emeritus Professor of English at Cardiff University. He is the author of a number of books on literary theory and on Shakespeare, including Structuralism and Semiotics (1977), That Shakespearian Rag (1986) and Meaning by Shakespeare (1992). He is also General Editor of the Accents on Shakespeare series published by Routledge.