Reason and Experience in Tibetan Buddhism: Mabja Jangchub Tsöndrü and the Traditions of the Middle Way (Routledge Critical Studies in Buddhism) (Hardcover) 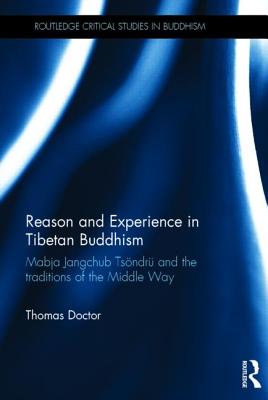 Reason and Experience in Tibetan Buddhism: Mabja Jangchub Tsöndrü and the Traditions of the Middle Way (Routledge Critical Studies in Buddhism) (Hardcover)

Based on newly discovered texts, this book explores the barely known but tremendously influential thought of the Tibetan Buddhist teacher, Mabja Jangchub Ts ndr (d. 1185).This Tibetan Buddhist master exercised significant influence on the interpretation of Madhyamaka thinking in Tibet during the formative phase of Tibetan Buddhism and plays a key role in the religious thought of his day and beyond.

The book studies the framework of Mabja's philosophical project, holding it up against the works of both his own Madhyamaka teachers as well as those of central authors of the later classical period. The emerging account of the evolution of Madhyamaka in Tibet reveals a striking pattern of transformative appropriations. This, in turn, affords us insights into the nature and function of tradition in Tibetan religious culture and Mahāyāna Buddhism at large. Innovation is demanded for both the advancement and consolidation of tradition.

This ground-breaking book is an invaluable contribution to the study of Tibetan philosophy. It is of great interest to Buddhist practitioners, specialists in Buddhist philosophy and Tibetan Buddhism.

Thomas Doctor recently received his PhD from the University of Lausanne, Switzerland. He has been working as Lecturer at the Centre for Buddhist Studies at Kathmandu University in Nepal.