Overruling Democracy: The Supreme Court Vs. the American People (Hardcover) 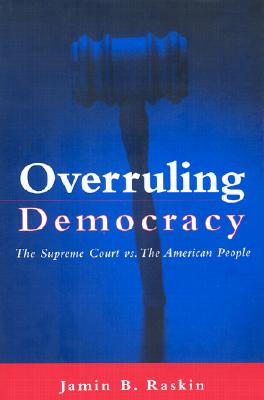 Overruling Democracy: The Supreme Court Vs. the American People (Hardcover)

By Jamin B. Raskin


Not On Our Shelves—Ships in 1-5 Days
(This book cannot be returned.)
The Supreme Court has recently issued decisions announcing that citizens have neither a constitutional right to vote, nor the right to an education. Conservative judges have continually disavowed claims to any rights not specifically mentioned in the Constitution. In "Overruling Democracy, " celebrated law professor Jamin B. Raskin, argues that we need to develop a whole new set of rights, through amendments or court decisions, that revitalize and protect the democracy of everyday life. Detailing specific cases through interesting narratives, "Overruling Democracy" describes the transgressions of the Supreme Court against the Constitution and the people - and the faulty reasoning behind them -- and lays out the plan for the best way to back a more democratic system.
Jamin B. Raskin is Professor of Law at American University in Washington D.C. His articles have appeared in Slate, The Washington Monthly, The American Prospect, TheNation, The Washington Post, The Los Angeles Times and many other newspapers, journals and magazines.