Elvis and Me: The True Story of the Love Between Priscilla Presley and the King of Rock N' Roll (Mass Market) 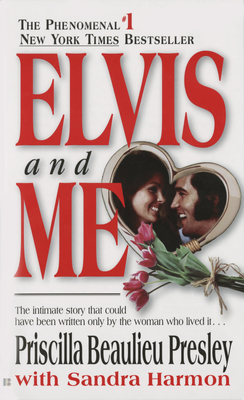 Elvis and Me: The True Story of the Love Between Priscilla Presley and the King of Rock N' Roll (Mass Market)


Backordered
The #1 New York Times bestselling memoir that reveals the intimate story of Elvis Presley and Priscilla Presley, told by the woman who lived it.

SOON TO BE THE MAJOR MOTION PICTURE PRISCILLA, DIRECTED BY SOFIA COPPOLA

Decades after his death, millions of fans continue to worship Elvis the legend. But very few knew him as Elvis the man. Here in her own words, Priscilla Presley tells the story of their love, revealing the details of their first meeting, their marriage, their affairs, their divorce, and the unbreakable bond that has remained long after his tragic death.

A tribute to both the man and the legend, Elvis and Me gives Elvis fans the world over an unprecedented look at the true life of the King of Rock 'N' Roll and the woman who loved him.
Priscilla Presley is an American actress and business magnate. She is the former wife of the late entertainer Elvis Presley as well as co-founder and former chairwoman of Elvis Presley Enterprises (EPE).
“Her love for him...jumps out from between the lines.”—Marilyn Beck, New York Daily News

“A sad, sweet book...the story it tells is fascinating.”—Washington Post

“This honest, full-lenth portrait paints him as he really was both in and out of the spotlight...his wife, who knew him better than anyone else, sees him clearly, steadily, and sees him whole.”—John Barkham Reviews