A Poem for Peter: The Story of Ezra Jack Keats and the Creation of The Snowy Day (Hardcover) 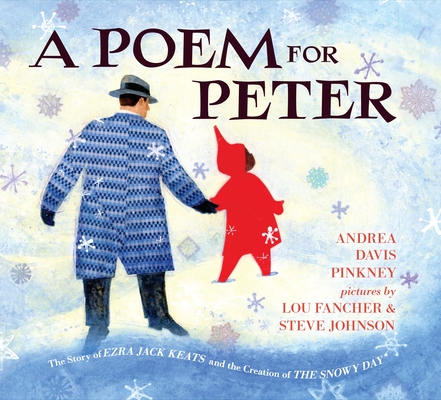 A Poem for Peter: The Story of Ezra Jack Keats and the Creation of The Snowy Day (Hardcover)


On Our Shelves Now at:
A celebration of the extraordinary life of Ezra Jack Keats, creator of The Snowy Day.

The story of The Snowy Day begins more than one hundred years ago, when Ezra Jack Keats was born in Brooklyn, N.Y. The family were struggling Polish immigrants, and despite Keats’s obvious talent, his father worried that Ezra’s dream of being an artist was an unrealistic one. But Ezra was determined. By high school he was winning prizes and scholarships. Later, jobs followed with the WPA and Marvel comics. But it was many years before Keats’s greatest dream was realized and he had the opportunity to write and illustrate his own book.

For more than two decades, Ezra had kept pinned to his wall a series of photographs of an adorable African American child. In Keats’s hands, the boy morphed into Peter, a boy in a red snowsuit, out enjoying the pristine snow; the book became The Snowy Day, winner of the Caldecott Medal, the first mainstream book to feature an African American child. It was also the first of many books featuring Peter and the children of his — and Keats’s — neighborhood.

Andrea Davis Pinkney’s lyrical narrative tells the inspiring story of a boy who pursued a dream, and who, in turn, inspired generations of other dreamers.
Andrea Davis Pinkney says, “As an African American child growing up in the 1960s, at a time when I didn’t see others like me in children’s books, the expressiveness of Keats’s illustrations had a profound effect.”

Today, Ms. Pinkney is the distinguished and bestselling author of many books for children and young adults, including picture books, novels, and non-fiction. Her books have received multiple Coretta Scott King Book Awards, Jane Addams Honor citations, nominations for the NAACP Image Awards, the Boston Globe/Horn book Honor medal, and many other accolades. In recognition of her significant contributions to literature for young people through her body of work, she was selected to deliver the May Hill Arbuthnot Lecture.

Andrea Davis Pinkney lives in Brooklyn, New York, with her husband and frequent collaborator, Brian Pinkney, and their two children.

Steve Johnson and Lou Fancher have illustrated numerous books together. Among the most critically acclaimed are My Many Colored Days by Dr. Seuss; The Frog Prince, Continued by Jon Scieszka; and Silver Seeds by Paul Paolilli and Dan Brewer.

★ "Those who love Peter (and who does not?) will relish the illustrations, particularly that of Keats holding hands with Peter under a snow-dappled tree. More to the point, Pinkney lets readers know what Peter meant and still means as a milestone in inclusive children's literature. "He brought a world of white / suddenly alive with color." A loving and forceful reminder that Keats' Peter is our Peter—always." —Kirkus Reviews, starred review

★ "Fancher and Steve Johnson’s acrylic, collage, and pencil illustrations seamlessly integrate images from Keats’ books into their own art, which employs a style complementary to the originals. Equally important they skillfully represent Pinkney’s lyrical text, which sometimes requires historical accuracy, magic realism, and nods to future possibilities, all within one spread . . . This is an important book." —Booklist, starred review

"Pinkney’s verse seamlessly weaves together story and fact to craft an intimate conversation about the artist’s history and impact . . . Lovely." —School Library Journal

"In lively verse, Pinkney presents a picture book biography of Ezra Jack Keats . . . The resonances are immediate and cathartic. Fancher and Johnson, who, like Keats, are known for their collage illustrations, thoughtfully incorporate Snowy Day motifs and other images from Peter’s world along with photos and additional archival material; the color palette and textures, too, effectively pay homage to Keats’s work." —The Horn Book

"A heartfelt and thoughtful look at an artist’s growth and a single individual’s effect on a genre." —BCCB