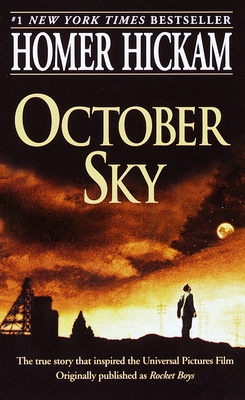 This is book number 1 in the Coalwood series.

It was 1957, the year Sputnik raced across the Appalachian sky, and the small town of Coalwood, West Virginia, was slowly dying.

Faced with an uncertain future, Homer Hickam nurtured a dream: to send rockets into outer space. The introspective son of the mine’s superintendent and a mother determined to get him out of Coalwood forever, Homer fell in with a group of misfits who learned not only how to turn scraps of metal into sophisticated rockets but how to sustain their hope in a town that swallowed its men alive.

As the boys began to light up the tarry skies with their flaming projectiles and dreams of glory, Coalwood, and the Hickams, would never be the same.
Homer H. Hickam, Jr., was born and raised in Coalwood, West Virginia. The author of Torpedo Junction, a Military History Book of the Month Club selection, as well as numerous articles for such publications as Smithsonian Air and Space and American History Illustrated, he is a NASA payload training manager for the International Space Program and lives in Huntsville, Alabama.