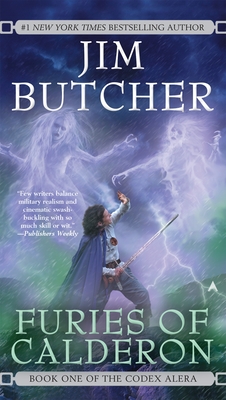 This is book number 1 in the Codex Alera series.

In this extraordinary fantasy epic, the #1 New York Times bestselling author of the Dresden Files leads readers into a world where the fate of the realm rests on the shoulders of a boy with no power to call his own...

For a thousand years, the people of Alera have united against the aggressive and threatening races that inhabit the world, using their unique bond with the furies—elementals of earth, air, fire, water, wood, and metal. But in the remote Calderon Valley, the boy Tavi struggles with his lack of furycrafting. At fifteen, he has no wind fury to help him fly, no fire fury to light his lamps. Yet as the Alerans’ most savage enemy—the Marat horde—return to the Valley, Tavi’s courage and resourcefulness will be a power greater than any fury, one that could turn the tides of war...
A martial arts enthusiast whose résumé includes a long list of skills rendered obsolete at least two hundred years ago, #1 New York Times bestselling author Jim Butcher turned to writing as a career because anything else probably would have driven him insane. He lives mostly inside his own head so that he can write down the conversation of his imaginary friends, but his head can generally be found in Independence, Missouri. Jim is the author of the Dresden Files, the Codex Alera novels, and the Cinder Spires series, which began with The Aeronaut’s Windlass.
“Epic fantasy in the best way, inspired by Tolkien.”—New York Times bestselling author Simon R. Green

“A fascinating world and magic system...the start of a promising series.”—Locus

“Butcher has created a wonderful new world of fantasy...This first book in the series introduces all the main characters and the creatures and events that make Alera a great world in which any reader can get lost.”—SF Site

“Absorbing...Butcher does a thorough job of world building, to say nothing of developing his action scenes with an abundance of convincing detail.”—Publishers Weekly