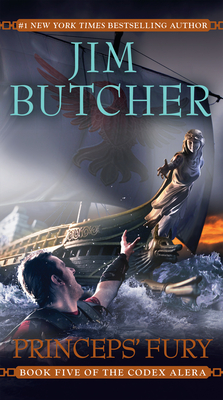 This is book number 5 in the Codex Alera series.

In the acclaimed Codex Alera novels, #1 New York Times bestselling author Jim Butcher has created a fascinating world in which the people of Alera use their unique bond with the elemental forces of nature for protection. But even nature may not be enough to stave off the coming storm…

Tavi of Calderon, now recognized as Princeps Gaius Octavian and heir to the crown, has achieved a fragile alliance with Alera’s oldest foes, the savage Canim. But when Tavi and his legions guide the Canim to their lands, his worst fears are realized. The dreaded Vord—the enemy of Aleran and Canim alike—have laid waste to the Canim homeland. And the Alerans find themselves trapped alongside their former enemies.

Meanwhile, war-torn Alera rebuilds while politicians and nobles vie for power. But from the south comes the news: the Vord have come to Alera. For a thousand years, Alera and her furies have withstood every enemy, and survived every foe. But the thousand years are over...
A martial arts enthusiast whose résumé includes a long list of skills rendered obsolete at least two hundred years ago, #1 New York Times bestselling author Jim Butcher turned to writing as a career because anything else probably would have driven him insane. He lives mostly inside his own head so that he can write down the conversation of his imaginary friends, but his head can generally be found in Independence, Missouri. Jim is the author of the Dresden Files, the Codex Alera novels, and the Cinder Spires series, which began with The Aeronaut’s Windlass.
“As is the case with Dresden, Mr. Butcher has the uncanny ability to make his Codex Alera realm seem real; as he understands it is in the subtle details...An exciting fantasy thriller.”—Midwest Book Review

“A treat for action fans and series followers.”—Booklist

“When it comes to versatility and rousing storytelling, Butcher is in a class by himself.”—RT Book Reviews