According to Hoyle: The Up-to-Date Edition of the World-Famous Book on Rules of Games (Mass Market) 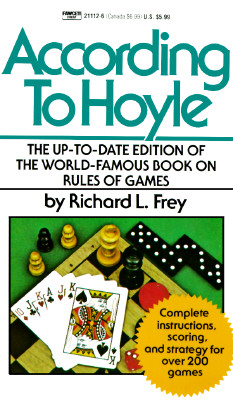 According to Hoyle: The Up-to-Date Edition of the World-Famous Book on Rules of Games (Mass Market)


Backordered
"A must for anyone who wants to play a game and play it correctly."
Charles H. Goren
Whether you play card games, dice games, parlor games, word games, chess, checker, backgammon, or solitaire games, here is a comprehensive, up-to-date book with the complete rules of your favorite games of skill and chance. ACCORDING TO HOYLE gives not only the rules but expert advice on winning, too.
Richard L. Frey was the president of the International Bridge Press Association for nearly a dozen years. His articles on many nonbridge subjects have appeared in leading magazines. His daily newspaper articles on bridge appeared nonstop for a record thirty-five years. When the rank of Life Master was created, his name was one of the first chosen. Mr. Frey continues to be the most respected dean of bridge writers. He died in 1988.