War and Peace and War: The Rise and Fall of Empires (Paperback) 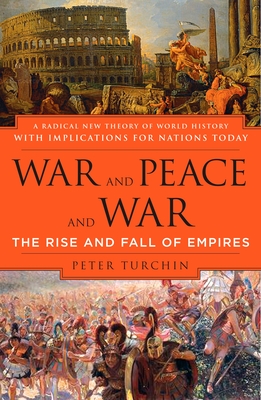 War and Peace and War: The Rise and Fall of Empires (Paperback)

In War and Peace and War, Peter Turchin uses his expertise in evolutionary biology to offer a bold new theory about the course of world history.

Turchin argues that the key to the formation of an empire is a society’s capacity for collective action. He demonstrates that high levels of cooperation are found where people have to band together to fight off a common enemy, and that this kind of cooperation led to the formation of the Roman and Russian empires, and the United States. But as empires grow, the rich get richer and the poor get poorer, conflict replaces cooperation, and dissolution inevitably follows. Eloquently argued and rich with historical examples, War and Peace and War offers a bold new theory about the course of world history with implications for nations today.
Peter Turchin is an evolutionary anthropologist and one of the founders of the new field of historical social science, Cliodynamics (peterturchin.com/cliodynamics/). His research interests lie at the intersection of social and cultural evolution, historical macrosociology, economic history and cliometrics, mathematical modeling of long-term social processes, and the construction and analysis of historical databases. Peter Turchin is a professor of evolutionary biology at the University of Connecticut, a research associate in the School of Anthropology at the University of Oxford, and the vice president of the Evolution Institute. More information is available at peterturchin.com.
Turchin's view of [history] from the perspective of an evolutionary biologist . . . promises a great deal. (The Times Higher Education Supplement)