Free Market: The History of an Idea (Hardcover) 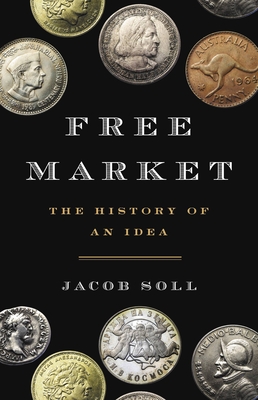 Free Market: The History of an Idea (Hardcover)

From a MacArthur “Genius,” an intellectual history of the free market, from ancient Rome to the twenty-first century

After two government bailouts of the US economy in less than twenty years, free market ideology is due for serious reappraisal. In Free Market, Jacob Soll details how we got to this current crisis, and how we can find our way out by looking to earlier iterations of free market thought. Contrary to popular narratives, early market theorists believed that states had an important role in building and maintaining free markets. But in the eighteenth century, thinkers insisted on free markets without state intervention, leading to a tradition of ideological brittleness. That tradition only calcified in the centuries that followed.

Tracing the intellectual evolution of the free market from Cicero to Milton Friedman, Soll argues that we need to go back to the origins of free market ideology in order to truly understand it—and to develop new economic concepts to face today’s challenges.

Jacob Soll is University Professor and a professor of philosophy, history, and accounting at the University of Southern California. The author of The Reckoning and The Information Master, Soll is the recipient of many prestigious awards, including the MacArthur “Genius” grant. He lives in Los Angeles.
“A timely and erudite history…incisive.”—Financial Times

"Free Market offers a rich and valuable antidote to narrower and more traditional accounts of the liberal economic tradition.”—The Guardian

“Nuanced history of a notion that, while central dogma in economics, is in the eye of the beholder….[an] authoritative account…stimulating….a cleareyed exposition of an important tenet of economic thought, with all its shades of meaning.”—Kirkus (starred review)

“If anyone is qualified to write a history of free-market thinking, it is surely Jacob Soll.”—Literary Review

“If, as Keynes asserted, ideas are in the end, what is most important, intellectual history captures the driving forces behind social change. There is much to be learned relevant to current policy debates from Jacob Soll’s engaging history of the free market idea. Whether you think you love or hate free markets, you will learn much from this important book.”—Lawrence H. Summers

“In this essential book, Jacob Soll gives us a lucid, frequently surprising, and altogether enthralling account of the history of free market thought. Deeply learned and engagingly written, the book has important implications for how we should think about free markets today. In every sense, it is a revelation.”—David A. Bell, Princeton University

“Jacob Soll's fascinating and pathbreaking study is a historical tour de force and a brilliant exploration of the major economic ideas that have shaped our world.”—Gordon Brown, former prime minister, United Kingdom

“Among the defining values of Western societies, free expression and human rights stand tall. What about the free market? How certain are we about its origins and meaning? As only a master historian can, Jacob Soll takes us through the origins, alternatives, and ambiguities. Defenders as well as detractors must consult this defining history.”—Margaret C. Jacob, distinguished research professor, UCLA

“In an awe-inspiring and enthralling tour from the ancient to the contemporary world, Jacob Soll dissolves the dichotomy of market and government, showing that it was campaigns for affluence led by the state in the century and a half before the French Revolution that birthed the dream of liberating economic affairs from interference. Soll is one of our master historians, and his newest book makes it impossible to think about the wealth of nations—or our political future—in the same way again.”—Samuel Moyn, Yale University