The Unsettling of Europe: How Migration Reshaped a Continent (Hardcover) 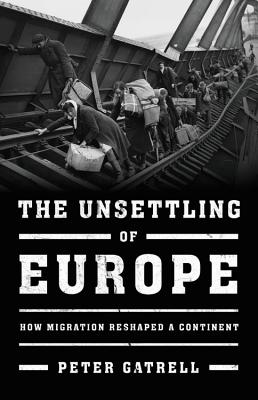 The Unsettling of Europe: How Migration Reshaped a Continent (Hardcover)

Migration is perhaps the most pressing issue of our time, and it has completely decentered European politics in recent years. But as we consider the current refugee crisis, acclaimed historian Peter Gatrell reminds us that the history of Europe has always been one of people on the move.

The end of World War II left Europe in a state of confusion with many Europeans virtually stateless. Later, as former colonial states gained national independence, colonists and their supporters migrated to often-unwelcoming metropoles. The collapse of communism in 1989 marked another fundamental turning point.

Gatrell places migration at the center of post-war European history, and the aspirations of migrants themselves at the center of the story of migration. This is an urgent history that will reshape our understanding of modern Europe.

Peter Gatrell is a renowned historian of modern migration and a professor of economic history at the University of Manchester. He is the author of six previous books on migration history and modern European history. He lives in Manchester, England.
"In a superb new study, The Unsettling of Europe, Peter Gatrell notes that, in the postwar era, Irish immigration to England 'steadily began to yield in significance to migration from other parts of the world.'"—New Yorker

"[T]his book ... provides an overview and essential starting point for anyone seeking to understand migration pressures in Europe and, by extension to other places, from Bangladesh to Texas."—New York Journal of Books

"Gatrell's eye for detail and sensitivity make this a compelling account that challenges the "us" and "them" framing into which much discussion of migration is forced. Its great strength is that it treats the emotional and cultural aspects of the subject with as much respect as the historical facts and figures."—The Guardian

"The Unsettling of Europe is a welcome contribution to this debate, because it does what so few other studies do: focuses clearly on the forces driving migration, and on the effects of migration on those who are uprooted."—Spiked

"Simply put, The Unsettling of Europe not only is a fundamental book for those studying contemporary European history and politics, but it also places the postcolonial world inside of European history in a way that does not treat migrants as 'Other,' and serves as a clarion call for historians that follow."—EuropeNow Journal

"The Unsettling of Europe is a definitive book in which Peter Gatrell, a historian of population movement at the University of Manchester, proves that "what we used to have" is a chimerical idea... [a] clearly written and essential history."—The Times

"One of the greatest strengths of the book is Gatrell's consistent attention to the voices of migrants themselves... Gatrell's closely focused studies help us to see this set of issues as illuminating some much wider questions about the way we live now."—New Statesman

"Peter Gatrell has produced a tour de force. With great sensitivity he follows the experiences of migrants as they encounter an often hostile and discriminatory environment in their new homes in Europe. This important and timely work on one of the most challenging issues in modern Europe deserves to be widely read."—Ian Kershaw, author of The Global Age: Europe, 1950-2017

"With migration often characterized as a new and threatening 'crisis' in Europe, acclaimed historian Peter Gatrell recasts the history of postwar Europe as a history of migration. From the repatriation of forced laborers and prisoners at the end of World War Two to the recent arrival Syrian refugees, Europe, he shows, has always been about people on the move. This timely and must-read book offers valuable lessons from the past as well as new ways to understand just what is at stake in the debate over immigration today."—Erika Lee, Director of the Immigration History Research Center at the University of Minnesota, and author of America for Americans: A History of Xenophobia in the United States

"The Unsettling of Europe is an immense achievement. Gatrell places migration where it belongs -- at the core of postwar European History. Refusing to confine himself to the well-worn territories of France, the United Kingdom and Germany, Gatrell explores migration in northern and southern Europe but also -- particularly impressively -- in the former Soviet Union. The topics range from the familiar -- guestworkers in West Germany -- to the novel -- how migrants approach and understand death. The range and the quality of scholarship are magnificent. But more than that, this is an optimistic and deeply humane book, qualities found all too rarely in our time."—Randall Hansen, Canada Research Chair in Global Migration, University of Toronto