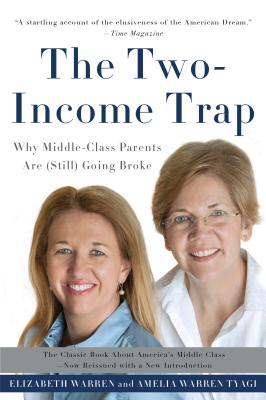 
In Stock—Click for Locations
From #1 New York Times bestselling author Senator Elizabeth Warren and consultant Amelia Warren Tyagi, the classic book about America's middle class -- and why economic security remains out of reach for many.
In this exposé, Elizabeth Warren and Amelia Warren Tyagi show that modern middle-class families are increasingly trapped by the grinding reality of flat wages and rising costs. Warren and Tyagi reveal how a ferocious bidding war for housing and education has silently engulfed America's suburbs, driving up the cost of keeping families in the middle class, and placing unprecedented pressure on hard-working families.
Revolutionary when it was first published in 2003, The Two-Income Trap remains disturbingly relevant today. Now with a new introduction by the authors, The Two Income Trap shows why the usual remedies won't solve the problem and points toward the policy changes that would create better opportunities for both parents and children.
Elizabeth Warren is the Leo Gottlieb Professor of Law at Harvard Law School. She is the co-author of As We Forgive Our Debtors and The Fragile Middle Class, as well as three leading commercial law casebooks. She is vice-president of the American Law Institute and served as Chief Advisor to the National Bankruptcy Review Commission. She lives in Cambridge, Massachusetts.

Amelia Warren Tyagi has worked as an Engagement Manager with McKinsey and Company, specializing in health care, insurance, and education, and she co-founded the successful healthcare start-up HealthAllies. She lives in Pacific Palisades, California, with her husband and two-year-old daughter, Octavia.
"A startling account of the elusiveness of the American Dream."—Time Magazine

"Brimming with proposed solutions to the nail-biting anxiety that the middle class finds itself in."—Wall Street Journal

"A well-researched road map of where we are, as well as viable escape routes."—Boston Globe