A History of Iran: Empire of the Mind (Paperback) 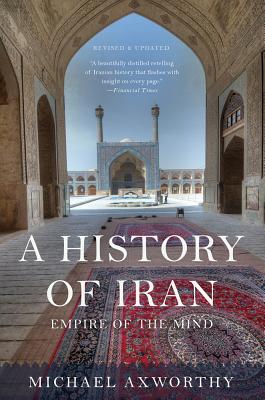 A History of Iran: Empire of the Mind (Paperback)


Not On Our Shelves—Ships in 1-5 Days
The definitive history of Iran, from the ancient Persian empires to today

Iran is a land of contradictions. It is an Islamic republic, but one in which only 1.4 percent of the population attend Friday prayers. Iran's religious culture encompasses the most censorious and dogmatic Shi'a Muslim clerics in the world, yet its poetry insistently dwells on the joys of life: wine, beauty, sex. Iranian women are subject to one of the most restrictive dress codes in the Islamic world, but make up nearly 60 percent of the student population of the nation's universities.

In A History of Iran, acclaimed historian Michael Axworthy chronicles the rich history of this complex nation from the Achaemenid Empire of sixth century BC to the revolution of 1979 to today, including a close look at Iran's ongoing attempts to become a nuclear power. A History of Iran offers general readers an essential guide to understanding this volatile nation, which is once again at the center of the world's attention.
Michael Axworthy teaches at the Institute of Arab and Islamic Studies at the University of Exeter (UK). The author of The Sword of Persia and Revolutionary Iran, Axworthy publishes widely in the field of Iranian history.
"Michael Axworthy's deft untangling of the
country's history, from the advent of Zoroastrianism to the 1979 revolution, is
a stunning achievement."—Observer

"A beautifully distilled retelling of Iranian history that flashes with insight on every page."—Financial Times

"An engrossing, powerfully argued, and elegantly written history of a country which finds itself again at the center of international affairs."—Justin Marozzi, author of Tamerlane: Sword of Islam, Conqueror of the World