200 Contractual Problems and Their Solutions (Hardcover) 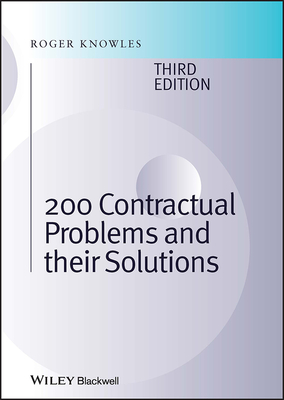 200 Contractual Problems and Their Solutions (Hardcover)


Special Order—Subject to Availability
This book examines 200 contractual problems which regularly arise on building and engineering projects and provides a detailed explanation of their solutions, citing standard contract conditions and key parts of legal judgements as authority. A succinct summary is provided at the end of each detailed solution.

It covers problems together with their solutions in respect of:

This book deals with a broad range of construction contracts including JCT Standard Form and Design and Build, New Engineering Contract NEC3, ICE and GC/Works/1.

Roger Knowles is a chartered surveyor, chartered arbitrator, barrister and CEDR accredited mediator. He left school as 16 years of age and commenced work as a trainee quantity surveyor, following which he secured his qualifications employing distance learning courses. His early career was that of a quantity surveyor, when he gained a great deal of experience of working on construction sites. He founded James R Knowles in 1973, a company of dispute resolution consultants, as a sole practitioner. Roger built up James R Knowles until it was a world renowned brand and in 1998 became a quoted company on the AIM market. He sold his interests in James R Knowles in 2006, since which time he has acted as an independent disputes resolution consultant. His career has involved representing clients in many parts of the world including East Asia, the Middle East and throughout the United Kingdom. His work includes the preparation and resolution of construction claims, representing parties in arbitration and adjudication and acting as arbitrator, adjudicator and mediator. Roger has been involved in training for many years. His specialist subjects include construction law, contract administration, arbitration, adjudication and ADR and he has lectured at well over 1,300 seminars at locations all over the world. Since the mid 1970s, Roger has been a regular contributor to technical journals, with more than 400 published articles to his name. His career has also included representing trade associations and he is a former member of the Joints Contract Tribunal which publishes JCT contracts. Roger was the founder of the Quantity Surveyors International and joint author of the Public Sector Partnering Contract.