Who Gives a Gigabyte?: A Survival Guide for the Technologically Perplexed (Hardcover) 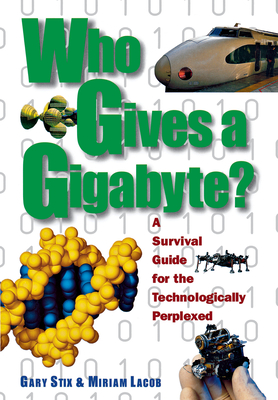 Who Gives a Gigabyte?: A Survival Guide for the Technologically Perplexed (Hardcover)


Not On Our Shelves—Ships in 1-5 Days
An exhilarating chronicle of the most revolutionary advancements in recent-and future-technology
Which new technologies are bound to have the biggest impact on our lives in the years ahead? This groundbreaking book looks at the latest technological superstars destined to reshape the upcoming century and offers easy-to-understand, engaging explanations of what they are, how they work, and how they will affect our lives. Written by a senior editor of Scientific American, the world's premier science magazine, and based on in-depth interviews with today's leading innovators as well as extensive research of the latest scientific literature, Who Gives a Gigabyte? takes you on a fast-paced tour into the brave new world of gene therapy, quantum computation, designer drugs, and recyclable cars.
Surveying the wide range of technological wonders, the authors investigate such diverse realms of scientific advancement as computing, telecommunications, laser beams, bioengineering materials, and alternative energy sources. From the Human Genome Project, which aims to spell out every letter of our genetic inheritance, to the implications of altering genes in important agricultural projects, to new strategies for attacking malignant cancer cells without the damaging side effects of traditional treatments, to the startling but still unsuccessful attempts to make computer software more like the human mind, Who Gives a Gigabyte? demystifies the technology of today and provides an enlightening glimpse into the limitless possibilities of tomorrow.
"An enjoyable and rewarding book." --Choice
"An informative overview of new and emerging technologies." --Booklist
"The reward for the reader is a solid grounding in technological literacy." --Scientific American
GARY STIX is a senior editor for the National Magazine Award-winning Scientific American. MIRIAM LACOB is a freelance journalist. Her articles have appeared in many publications and magazines, including Scientific American, Data Communications, and Computer Decision.