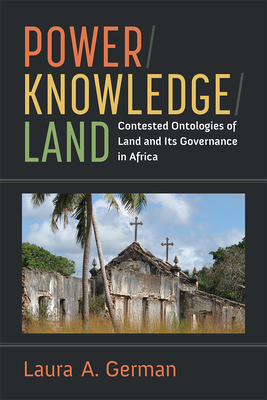 The 2008 outcry over the “global land grab” made headlines around the world, leading to a sustained interest in the dynamics and fate of customary land among both academics and development practitioners. In Power/Knowledge/Land, author Laura German profiles the consolidation of a global knowledge regime surrounding land and its governance within international development circles in the decade following this outcry, and the growing enrollment of previously antagonistic actors within it. Drawing theoretical insights on the inseparability of power and knowledge, German reveals the dynamics of knowledge practices that have enabled the longstanding project of commodifying customary land – and the more contemporary interests in acquiring and financializing it – to be advanced and legitimated by capturing the energies of socially progressive forces. By bringing theories of change from the emergent land governance orthodoxy into dialogue with the ethnographic evidence from across the African continent and beyond, concepts masquerading as universal and self-evident truths are provincialized, and their role in commodifying customary land and entrenching colonial futurities put on display. In doing so, the volume brings wider academic debates surrounding productive forms of power into the heart of the land grab debate, while enhancing their accessibility to a wider audience.

Power/Knowledge/Land takes current scholarly debates surrounding land grabs beyond their theoretical moorings in critical agrarian studies, political economy and globalization into contemporary debates surrounding the politics of knowledge—from theories of coloniality to ontological anthropology, thereby enabling new dynamics of the phenomenon to be revealed. The book deploys a pioneering epistemology integrating deconstructionist approaches (to reveal the tactics, truth claims and ontological assumptions of global knowledge brokers), with systematic qualitative reviews and comparative study (to contrast these dominant constructs with the evidence and reveal alternative ways of knowing “land” and practicing “security” from the ethnographic literature). This helps to reveal the Western and modernist biases in the narratives that have been advanced about women, custom, and security, revealing how the coloniality of knowledge works to grease the wheels of land takings by advancing highly provincialized constructs aligned with western interests as universal truths.

Laura German is Professor in the Department of Anthropology at the University of Georgia.