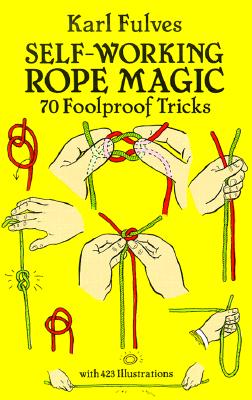 
Special Order—Subject to Availability
(This book cannot be returned.)
For centuries, rope tricks have been staples of the magician's repertoire. Surprisingly, many of the best ones are self-working, meaning they do not require unusual dexterity or long hours of practice. This excellent guidebook, written by one of today's foremost authorities on magic, presents 70 of the best, most amazing self-working rope tricks ever devised -- tricks that amateur magicians can master in a short time.
After a brief introduction and a section devoted to acquiring and preparing the proper ropes, Karl Fulves begins the book by introducing rope tricks based on simple overhand knots, slip knots and square knots. These are followed by such tricks as the Vishnu Rope Mystery and the Hindu Turban Mystery in the chapter entitled Cut-and-Restored Rope. In Ropes That Think he demonstrates such fascinating maneuvers as Liar's Ropes and S ance. You'll also learn how to do a one-hand figure eight, perform a double-ring ceremony and make an endless chain.
Novice magicians as well as veterans can learn these foolproof tricks quickly and easily with Karl Fulves' clearly worded instructions and over 400 step-by-step illustrations. Along with the specifics of how to perform each trick, Mr. Fulves provides helpful phrases and bits of patter to help readers present each routine with a professional flourish.
Karl Fulves is one of the most respected authorities in the field of magic. For over 40 years, he has written hundreds of books on the subject and taught the art of illusion to thousands of people of all ages. This legendary figure also edited and published such magazines as Epilogue and The Pallbearers Review.