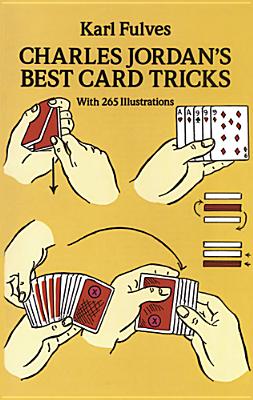 One of the legendary figures in the history of card magic, Charles T. Jordan (1888-1944) is known for the astonishing range of his inventive ability, the subtlety of his thinking, and the fact that so many of his creations have become magic classics. Although he did not perform in public, he profoundly influenced later generations of magicians and his writings embody many of the fundamental principles used in card magic today.
In this volume, one of today's best-known writers on magic has compiled a wealth of Jordan's most impressive card tricks -- impromptu tricks, banded-deck tricks, stacked-deck tricks, sleight-of-hand tricks, prepared-card tricks, shuffle systems, four-ace tricks, tricks using stripper decks and one-way decks, and many more. Now you can learn amazing feats of card manipulation that not only baffle amateurs but fool professional magicians as well. To aid the amateur performer, Karl Fulves has completely rewritten each trick, added explanatory details where necessary, and suggested simpler alternative techniques to complicated or advanced methods.
By following the carefully written and illustrated instructions in this book you can add these mystifying manipulations to your card conjuring repertoire: The Incomprehensible Destroyed Card, The Triple Escape, Psychic Prediction, Quadruple Concentration, Bewildero, An Impromptu Detection, Satan's Prophecy, The Demon Color Change, Long-Distance Mind Reading, The Bewitched Aces, The Master Riddle, The Electrified Strippers, The Stabbed Pair, and scores of others. Over 260 illustrations by Joseph Schmidt augment the text and demonstrate the techniques needed to master each trick.

Karl Fulves is one of the most respected authorities in the field of magic. For over 40 years, he has written hundreds of books on the subject and taught the art of illusion to thousands of people of all ages. This legendary figure also edited and published such magazines as Epilogue and The Pallbearers Review.