Mexico: From the Olmecs to the Aztecs (Paperback) 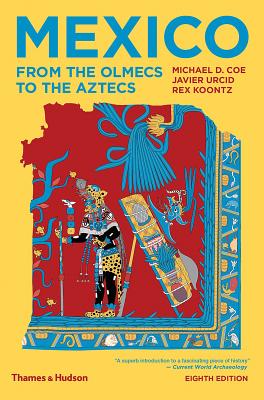 Mexico: From the Olmecs to the Aztecs (Paperback)

An extensive update to the authoritative introduction to Mexico’s ancient civilizations.

“A must for anyone interested in archaeology and history.” —DIG

Mexico arrives in its eighth edition with a new look and the most recent discoveries. This is the story of the pre-Spanish people of Mexico, who, with their neighbors the Maya, formed some of the most complex societies north of the Andes. Revised and expanded, the book is updated with the latest developments and findings in the field and current terminology.

The new edition includes expanded coverage of Oaxaca, particularly Monte Alba´n, one of the earliest cities in Mesoamerica and the center of the Zapotec civilization. Recent research on the Olmecs and the legacy of the Maya offer a wider and more cohesive narrative of Mexico’s history. And a fully revised epilogue discusses the survival of indigenous populations in Mexico from the arrival of the Spanish through to the present day.

Mexico has long been recognized as the most readable and authoritative introduction to the region’s ancient civilizations. Featuring up-to-date research and, for the first time, full-color illustrations throughout, this book brings to life the vibrant ancient art and architecture of Mesoamerica.

Javier Urcid is the Jane’s Chair Professor of Latin American Studies at Brandeis University, where he teaches archaeology, material culture, and Mesoamerican civilizations.

Rex Koontz is Professor of Art History at the University of Houston and Consulting Curator of Ancient American Art at the Museum of Fine Arts, Houston. He has written widely on ancient Mexican art, architecture, and aesthetics.