The Book of Yokai: Mysterious Creatures of Japanese Folklore (Paperback) 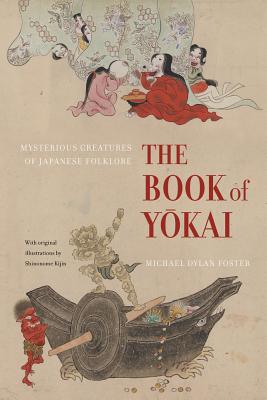 The Book of Yokai: Mysterious Creatures of Japanese Folklore (Paperback)


Not On Our Shelves—Ships in 1-5 Days
A lively excursion into Japanese folklore and its ever-expanding influence on global popular culture through the concept of yokai.

Drawing on years of research in Japan, Michael Dylan Foster unpacks the history and cultural context of yokai, tracing their roots, interpreting their meanings, and introducing people who have hunted them through the ages. In this delightful and accessible narrative, readers will explore the roles played by these mysterious beings within Japanese culture and will also learn of their abundance and variety through detailed entries, some with original illustrations, on more than fifty individual creatures. The Book of Yokai invites readers to examine how people create, transmit, and collect folklore, and how they make sense of the mysteries in the world around them. By exploring yokai as a concept, we can better understand broader processes of tradition, innovation, storytelling, and individual and communal creativity.

Michael Dylan Foster is Professor of Japanese, Department Chair of East Asian Languages and Cultures at University of California, Davis. He is the author of Pandemonium and Parade: Japanese Monsters and the Culture of Yokai (California) and numerous articles on Japanese folklore, literature, and media.

Shinonome Kijin is an artist and scholar of yokai. He lives and works in Chiba Prefecture, Japan.
"Foster creates engagingly rich portraits of yokai . . . Kijin’s illustrations draw on Japanese artistic traditions to depict each creature’s personality and visual quirks, making this field guide a delight for researchers, enthusiasts and the uninitiated alike . . . Seen this way, even the most horrific yokai seems beautiful."
— Times Literary Supplement

"Foster . . . analyses and catalogues hundreds of yokai and tells many stories . . . enhanced by witty illustrations by Shinonome Kijin . . . A fascinating and charming compendium."
— Literary Review

"An interesting cultural text highly recommended to Japanophiles or aficionados of the otherworldly."
— Foreword Reviews

"Michael Dylan Foster draws the reader into a haunting tale of the uncanny from the first page."
— Journal of Religion in Japan

"The Book of Yokai is a fascinating and enormously informative study. . . . Foster's narrative is smooth and often humorous. The book is easy to read, and at the same time immensely informative on the complicated and varied ways yokai have existed throughout Japanese history."
— Western Folklore

"Readers will be fascinated (as well as teased) by the kaleidoscope of creatures, malignant and benign."
— International Institute for Asian Studies