Adventures of a Jazz Age Lawyer: Nathan Burkan and the Making of American Popular Culture (Hardcover) 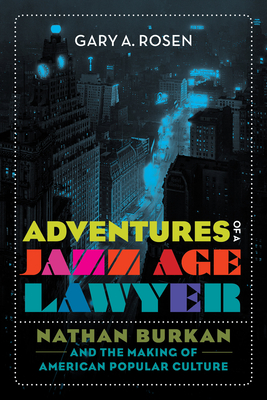 Adventures of a Jazz Age Lawyer: Nathan Burkan and the Making of American Popular Culture (Hardcover)

By Gary A. Rosen

Adventures of a Jazz Age Lawyer is the lively story of legal giant Nathan Burkan, whose career encapsulated the coming of age of the institutions, archetypes, and attitudes that define American popular culture. With a client list that included Charlie Chaplin, Al Jolson, Frank Costello, Victor Herbert, Mae West, Gloria Morgan Vanderbilt, Arnold Rothstein, and Samuel Goldwyn, Burkan was “New York’s Spotlight Lawyer” for more than three decades. He was one of the principal authors of the epochal Copyright Act of 1909 and the guiding spirit behind the American Society of Composers, Authors, and Publishers (Ascap), which provided the first practical means for songwriters to collect royalties for public performances of their works, revolutionizing the music business and the sound of popular music. While the entertainment world adapted to the disruptive technologies of recorded sound, motion pictures, and broadcasting, Burkan’s groundbreaking work laid the legal foundation for the Great American Songbook and the Golden Age of Hollywood, and it continues to influence popular culture today.

Gary A. Rosen tells stories of dramatic and uproarious courtroom confrontations, scandalous escapades of the rich and famous, and momentous clashes of powerful political, economic, and cultural forces. Out of these conflicts, the United States emerged as the world’s leading exporter of creative energy. Adventures of a Jazz Age Lawyer is an engaging look at the life of Nathan Burkan, a captivating history of entertainment and intellectual property law in the early twentieth century, and a rich source of new discoveries for anyone interested in the spirit of the Jazz Age.

Gary A. Rosen has practiced intellectual property law for more than thirty years and is Adjunct Professor of Law at the Kline School of Law at Drexel University. He is the author of a book on popular music and copyright, Unfair to Genius: The Strange and Litigious Career of Ira B. Arnstein, and he writes a blog on law and popular culture called Jazz Age Lawyer (www.jazzagelawyer.com).
"Lively and revealing,"
— Wall Street Journal

“A thoughtful and in-depth look at the substance of many foundational cases in the history of entertainment history.”?

“Reflective, detailed examples of Burkan's impact on music and film. This is the only detailed examination of this subject, and it will be important for those interested in entertainment law and popular culture.”
— CHOICE

“A captivating look at an American original. . . . Rosen’s a good writer with a fun story to tell, and his enthusiasm makes Jazz Age Lawyer a delightful read. He loves these characters.”

“Lively new biography. . . . Much of Burkan’s work has lasted right up to the modern era and the digital challenges that have upended the music business. Burkan’s legacy of protecting and encouraging ongoing creative output, according to Rosen, helps assure that art continues to reflect the time in which it is made.”

"A rich and detailed history of an important moment in the development of American popular culture through a legal lens."?