We'll Play till We Die: Journeys across a Decade of Revolutionary Music in the Muslim World (Hardcover) 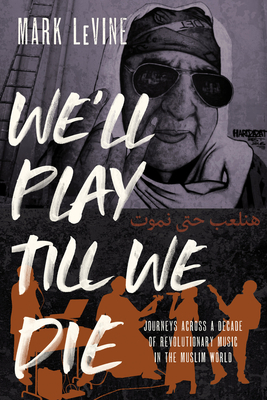 We'll Play till We Die: Journeys across a Decade of Revolutionary Music in the Muslim World (Hardcover)


On Our Shelves Now at:
In his iconic musical travelogue Heavy Metal Islam, Mark LeVine first brought the views and experiences of a still-young generation to the world. In We'll Play till We Die, he joins with this generation's leading voices to write a definitive history of the era, closing with a cowritten epilogue that explores the meanings and futures of youth music from North Africa to Southeast Asia.

We'll Play till We Die dives into the revolutionary music cultures of the Middle East and larger Muslim world before, during, and beyond the waves of resistance that shook the region from Morocco to Pakistan. This sequel to Mark LeVine's celebrated Heavy Metal Islam shows how some of the world's most extreme music not only helped inspire and define region-wide protests, but also exemplifies the beauty and diversity of youth cultures throughout the Muslim world.

Two years after Heavy Metal Islam was published in 2008, uprisings and revolutions spread like wildfire. The young people organizing and protesting on the streets—in dozens of cities from Casablanca to Karachi—included the very musicians and fans LeVine spotlighted in that book. We'll Play till We Die revisits the groundbreaking stories he originally explored, sharing what has happened to these musicians, their music, their politics, and their societies since then. The book covers a stunning array of developments, not just in metal and hip hop scenes, but with emo in Baghdad, mahraganat in Egypt, techno in Beirut, and more. LeVine also reveals how artists have used global platforms like YouTube and SoundCloud to achieve unprecedented circulation of their music outside corporate or government control. The first collective ethnography and biography of the post-2010 generation, We'll Play till We Die explains and amplifies the radical possibilities of music as a revolutionary force for change.
Mark LeVine is a Guggenheim-winning musician who has recorded and toured with acclaimed performers, including Mick Jagger, Chuck D, Dr. John, Ozomatli, Hassan Hakmoun, Seun and Femi Kuti, and other leading Middle Eastern and African artists. His recording on Ozomatli's album Street Signs won a Grammy in 2005. He is also Professor of Middle Eastern and African Histories at the University of California, Irvine. His many books include Twilight of Empire, coedited with Viggo Mortensen. He is also author of Overthrowing Geography and coeditor of One Land, Two States.