The War in Court: Inside the Long Fight against Torture (Hardcover) 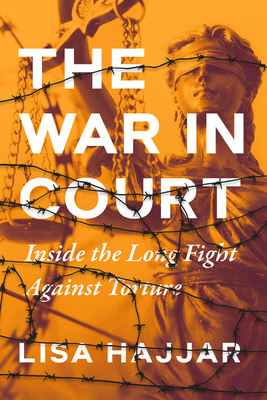 The War in Court: Inside the Long Fight against Torture (Hardcover)


On Our Shelves Now at:
How hundreds of lawyers mobilized to challenge the illegal treatment of prisoners captured in the war on terror and helped force an end to the US government's most odious policies.

In The War in Court, sociologist Lisa Hajjar traces the fight against US torture policy by lawyers who brought the "war on terror" into courts. Their victories, though few and far between, forced the government to change the way prisoners were treated and focused attention on state crimes perpetrated in the shadows. If not for these lawyers and their allies, US torture would have gone unchallenged because elected officials and the American public, with a few exceptions, did nothing to oppose it. This war in court has been fought to defend the principle that there is no legal right to torture.

Told as a suspenseful, high-stakes story, The War in Court clearly outlines why challenges to the torture policy had to be waged on the legal terrain and why hundreds of lawyers joined the fight. Drawing on extensive interviews with key participants, her own experiences reporting from Guantánamo, and her deep knowledge of international law and human rights, Hajjar reveals how the ongoing fight against torture has had transformative effects on the legal landscape in the United States and on a global scale.
Lisa Hajjar is Professor of Sociology at the University of California, Santa Barbara, whose work focuses on the relationship between law and conflict. She is the author of Courting Conflict and Torture: A Sociology of Violence and Human Rights.