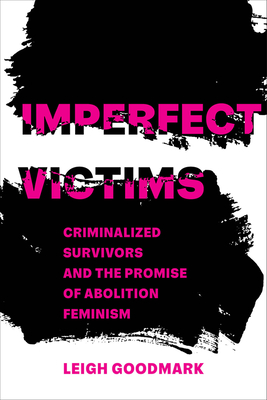 This is book number 8 in the Gender and Justice series.

A profound, compelling argument for abolition feminism—to protect criminalized survivors of gender-based violence, we must dismantle the carceral system.

Since the 1970s, anti-violence advocates have worked to make the legal system more responsive to gender-based violence. But greater state intervention in cases of intimate partner violence, rape, sexual assault, and trafficking has led to the arrest, prosecution, conviction, and incarceration of victims, particularly women of color and trans and gender-nonconforming people. Imperfect Victims argues that only dismantling the system will bring that punishment to an end.

Amplifying the voices of survivors, including her own clients, abolitionist law professor Leigh Goodmark deftly guides readers on a step-by-step journey through the criminalization of survival. Abolition feminism reveals the possibility of a just world beyond the carceral state, which is fundamentally unable to respond to, let alone remedy, harm. As Imperfect Victims shows, abolition feminism is the only politics and practice that can unwind the indescribable damage inflicted on survivors by the very system purporting to protect them.