The Secret Language of Birthdays: Your Complete Personology Guide for Each Day of the Year (Paperback) 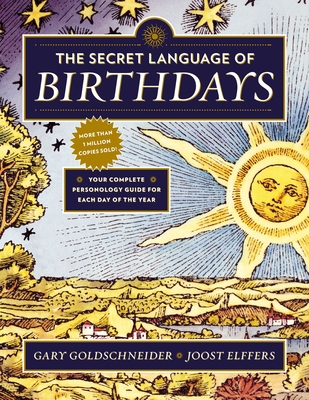 The Secret Language of Birthdays: Your Complete Personology Guide for Each Day of the Year (Paperback)


Not On Our Shelves—Ships in 1-5 Days
Combining astrology, numerology, and pure psychic intuition, The Secret Language of Birthdays is a wholly unique compilation that reveals one's strengths, weaknesses, and major issues while providing practical advice and spiritual guidance.

Many have suspected that your birthday affects your personality and how you relate to others. Nineteen years and over one million copies later, The Secret Language of Birthdays continues to fascinate readers by describing the characteristics associated with being born on a particular day. The 366 personality profiles are based on astrology, numerology, the tarot, and Gary Goldschneider’s observations of more than 14,000 people. Your strengths, weaknesses, and major concerns will be illuminated while you are given practical advice and spiritual guidance. After you study your profile, it will be hard to resist examining those of family, friends, colleagues, and even celebrities.
Gary Goldschneider began his study of human personality with an interest in biographies and psychoanalytic theory. Before deciding against a career in medicine, for three years he attended Yale Medical School, where he studied psychiatry. During this time he discovered his deep and abiding interest in astrology and its symbolic relationship to personality.

Joost Elffers was born in Amsterdam. He created and produced numerous books over the past twenty years, including Play With Your Food and The 48 Laws of Power. He lives in New York.