The Haunting of Alma Fielding: A True Ghost Story (Paperback) 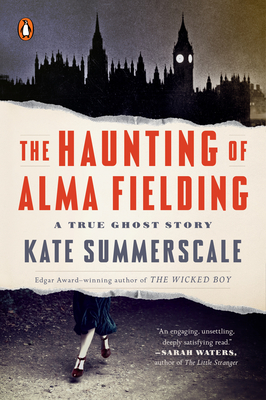 The Haunting of Alma Fielding: A True Ghost Story (Paperback)


On Our Shelves Now at:
Named a Best Book of the Year by NPR • The Sunday Times • The New Statesman • The Times • The Spectator • The Telegraph

“Prepare not to see much broad daylight, literal or metaphorical, for days if you read this.... The atmosphere evoked is something I will never forget.”—The Times (London)

London, 1938. In the suburbs of the city, a young housewife has become the eye in a storm of chaos. In Alma Fielding’s modest home, china flies off the shelves and eggs fly through the air; stolen jewelry appears on her fingers, white mice crawl out of her handbag, beetles appear from under her gloves; in the middle of a car journey, a turtle materializes on her lap. The culprit is incorporeal. As Alma cannot call the police, she calls the papers instead.

After the sensational story headlines the news, Nandor Fodor, a Hungarian ghost hunter for the International Institute for Psychical Research, arrives to investigate the poltergeist. But when he embarks on his scrupulous investigation, he discovers that the case is even stranger than it seems.

By unravelling Alma’s peculiar history, Fodor finds a different and darker type of haunting, a tale of trauma, alienation, loss and revenge. He comes to believe that Alma’s past has bled into her present, her mind into her body. There are no words for processing her experience, so it comes to possess her. As the threat of a world war looms, and as Fodor’s obsession with the case deepens, Alma becomes ever more disturbed.

With characteristic rigor and insight, Kate Summerscale brilliantly captures the rich atmosphere of a haunting that transforms into a very modern battle between the supernatural and the subconscious.
Kate Summerscale, formerly the literary editor of the Daily Telegraph (London), is the author of The Queen of Whale Cay, which won a Somerset Maugham Award and was short-listed for the Whitbread Biography Award. The Suspicions of Mr. Whicher, a number one bestseller in the UK, has been translated into more than a dozen languages and won the Samuel Johnson Prize for Non-Fiction and the British Book Awards Book of the Year. The Wicked Boy won the Edgar Award for Best Fact Crime. The Haunting of Alma Fielding was short-listed for the Baillie Gifford Prize. Summerscale lives in London.
“About women and power, about anxiety of the unknown and the fear of looming war, about the choices people make (consciously or unconsciously) in order to escape certain aspects of their lives . . . Summerscale's writing is so inviting, the historical details folded into the narrative so well, that The Haunting of Alma Fielding reads like a novel you don't want to put down.” —Ilana Masad, NPR

“Delightful period piece . . . always prescient about the social status of the women she studies, Summerscale notes that Alma was the very model of a colorless, faceless, powerless housewife. But a housewife with psychic powers could escape those social constraints.” —Marilyn Stasio, The New York Times Book Review

“Kate Summerscale’s book plunges readers into this febrile atmosphere of uncertainty that deepened as a new world war clouded the horizon. It was an electric time—quite literally— which can be seen in some ways to presage our own jittery epoch. Indeed, Summerscale has a communicative fascination for moments of societal flux.” —Tobias Grey, Airmail

“[A] wonderful book about the world of mediums, it deals, very soberly, with a subject that's often treated in a very trivial way. If I could have created a non-fiction companion for my novel Beyond Black, that would be the book.”—Hilary Mantel, BBC Radio 4

“Nobody is better at unpicking stories of ghosts and murders than Kate Summerscale, and this book is one of her best. Set in the unsettling world of the spiritualism-obsessed late 1930s, it is the story of Alma Fielding, a south London woman who claimed to be attacked by her own flying furniture. Was she deluded? A fraud? Or was there really a poltergeist at work? Summerscale has enormous fun finding out, and her oddly haunting story will stay with you for weeks.” —Dominic Sandbrook, The Sunday Times

“A terrific true ghost story . . . her best book since The Suspicions of Mr Whicher . . . She has achieved the perfect balance between her central story and its cultural context.” —Kathryn Hughes, The Guardian

“Prepare not to see much broad daylight, literal or metaphorical, for days if you read this . . . the atmosphere evoked is something I will never forget.” —Ysenda Maxtone Graham,
The Times

“Every new book by Kate Summerscale is a cause for celebration, but The Haunting of Alma Fielding is her best since The Suspicions of Mr Whicher . . . as always, she is a calm and riveting guide to traumatic historical events.” —Ruth Scurr, Spectator

“Interwar Britain's mania for the occult underpins Kate Summerscale’s The Haunting of Alma Fielding, about a woman in suburban Thornton Heath who claimed to be surrounded by poltergeists. The whole thing was an elaborate fraud, but what made it unusual (in an era when the dodgy medium was the most ubiquitous form of charlatan) was that the traumatised Fielding's actions were ‘the products of damage rather than conscious deceit.’” —Simon Heffer, The Telegraph

“As with her previous books, Summerscale weaves personal records with meticulous research carried out over three years, to not just resurrect the people involved, but the world in which they live. We are walking with the dead, but the author is conjuring something more believable, more unsettling, than anything you will find in a dodgy seance hall.” —David Marsland, Evening Standard

“Summerscale revisits these strange events with her customary wide research and in lucid and unadorned prose. She draws a convincing and compelling portrait of a moment of mass anxiety in which so deep was the longing to believe that anything could become believable.” —Lucy Lethbridge, Literary Review

“With The Haunting of Alma Fielding, Kate Summerscale does for ghosts what she did for a murder in her very successful The Suspicions of Mr Whicher.” —Caroline Moorehead, Times Literary Supplement

“Summerscale's account of their strange relationship is astonishingly gripping, with the bonus of a pleasingly chilling spookiness.” —Jake Kerridge, Daily Mirror

“Readers will be riveted . . . Edgar winner Summerscale (The Wicked Boy: The Mystery of a Victorian Child Murderer) illuminates the bizarre events that afflicted Alma Fielding, a suburban London housewife, in this mind-bending historical investigation. . . Summerscale vividly recreates the four months in 1938 that fascinated a Britain seeking distraction from Hitler’s ominous aggressions and reconstructs the events and the secret inner torment that led to Alma’s brief appearance in the spotlight with sensitivity and a novelist’s gift for narrative.” —Publishers Weekly, Starred Review

“Likely to appeal to readers of ghost stories and psychology alike, this well-researched chronicle pulls directly from firsthand accounts, interviews, news articles, seances, photographs, and other sources to provide as comprehensive a view as possible.” —Library Journal

“Summerscale has produced a thoroughly engrossing tale about the power of trauma and how the past can haunt us all.” —Booklist

“Fascinating . . . In the 1930s, as England was mourning its dead from World War I and flinching at the possibility of a second, the practice of spiritualism, which was rapidly gaining in popularity, needed an honest man to investigate its claims. When Nandor Fodor heard about Alma Fielding, an English housewife who reportedly teleported objects and channeled spirits, he embarked on the difficult mission to prove Alma’s claims while preserving his own integrity and reputation . . . An astute psychological study enlivened by dry wit, eccentric characters, and informed analyses.” —Kirkus Reviews

“With her eye for evocative period detail, her sensitivity to the quirks and poignancies of human motivation, and her brilliant storytelling skills, Summerscale has taken this corker of a case and made it as gripping as a novel. An engaging, unsettling, deeply satisfying read.” —Sarah Waters, author of Tipping the Velvet

“A page-turner with the authority of history.” —Philippa Gregory, author of The Other Queen