Shaking the Gates of Hell: A Search for Family and Truth in the Wake of the Civil Rights Revolution (Hardcover) 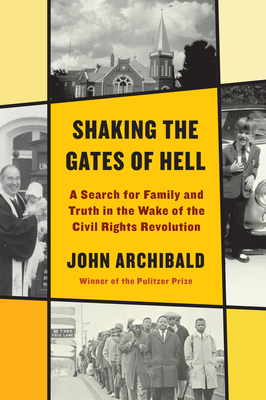 Shaking the Gates of Hell: A Search for Family and Truth in the Wake of the Civil Rights Revolution (Hardcover)


In Stock—Click for Locations
On growing up in the American South of the 1960s—an all-American white boy—son of a long line of Methodist preachers, in the midst of the civil rights revolution, and discovering the culpability of silence within the church. By the Pulitzer Prize-winning journalist and columnist for The Birmingham News.

Everything Archibald knows and believes about life is "refracted through the stained glass of the Southern church. It had everything to do with people. And fairness. And compassion."

In Shaking the Gates of Hell, Archibald asks: Can a good person remain silent in the face of discrimination and horror, and still be a good person?

Archibald had seen his father, the Rev. Robert L. Archibald, Jr., the son and grandson of Methodist preachers, as a moral authority, a moderate and a moderating force during the racial turbulence of the '60s, a loving and dependable parent, a forgiving and attentive minister, a man many Alabamians came to see as a saint. But was that enough? Even though Archibald grew up in Alabama in the heart of the civil rights movement, he could recall few words about racial rights or wrongs from his father's pulpit at a time the South seethed, and this began to haunt him.

In this moving and powerful book, Archibald writes of his complex search, and of the conspiracy of silence his father faced in the South, in the Methodist Church and in the greater Christian church. Those who spoke too loudly were punished, or banished, or worse. Archibald's father was warned to guard his words on issues of race to protect his family, and he did. He spoke to his flock in the safety of parable, and trusted in the goodness of others, even when they earned none of it, rising through the ranks of the Methodist Church, and teaching his family lessons in kindness and humanity, and devotion to nature and the Earth.

Archibald writes of this difficult, at times uncomfortable, reckoning with his past in this unadorned, affecting book of growth and evolution.
JOHN ARCHIBALD is a current Nieman Fellow at Harvard. He is a columnist for the Alabama Media Group. His columns appear in The Birmingham News, The Huntsville Times, the Mobile Press-Register, AL.com and its social brand, Reckon. He won the Pulitzer Prize for commentary in 2018. His book, Shaking the Gates of Hell, published by Knopf, is about his family, civil rights in the South and the church’s role in a conspiracy of silence.
ONE OF NPR'S BEST BOOKS OF THE YEAR

“A fascinating blend of family memoir and moral reckoning . . . Archibald’s honest account of one family’s uneasy journey through the civil rights and gay rights revolutions makes it clear that there are no easy decisions—or answers—when grappling with issues of faith and social justice.”—The Washington Post

“Evocative . . . a complex, fraught exploration of ‘the complicit and conspiratorial south’ . . . a sincere, poignant synthesis of memoir and social history of a troubled time.”—Kirkus

“Poignant . . . A powerful reflection on the influences of family and community and the ability to act justly in tumultuous times. Biography readers, especially those interested in reconciling the past, will be captivated by Archibald’s honest, conversational style.”—Library Journal
For This Book...
Video